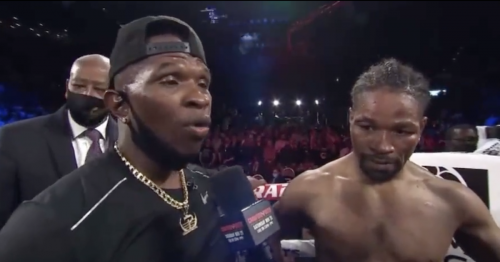 Shawn Porter has forgiven his father for stopping his fight with Terence Crawford and thinks fans have misunderstood his post-fight comments.

The perennial welterweight contender was stopped in the tenth round by 'Bud' after being dropped twice by the undefeated champion.

His father and coach, Kenny Porter, pulled his son out of the fight after the second knockdown and criticised his preparation for the fight.

"Honestly his preparation, he didn't prepare like I wanted him to. So that just makes me sad and I don't want him in that situation," he said of Porter.

And the former two-time welterweight champion Porter, who announced his retirement after the loss, explained why he forgives his father.

Shawn Porter's father was critical of his son's performance

"I think collectively whether anybody agrees or disagrees with what he said last night in the ring, a lot of emotions go in a round and I give him my dad a 100 per cent pass," Porter told Fight Hype.

"You can't expect everyone to do that, especially when they don't know my dad. We haven't had a full conversation about this retirement.

"But I have a pretty good feeling that my dad is completely at peace at everything, I am as well and I'm looking forward to the next chapter."

The 34-year-old ends his lengthy career having fought a who's who of names at welterweight, such as Errol Spence Jr, Yordenis Ugas and Crawford.

Did Shawn Porter's father make the right decision to stop the fight? Let us know in the comments section below

He was 1-2 in his last three bouts having lost a narrow decision to Spence in 2019 before outpointing Sebastian Formella last August.

Porter said his tactic for the fight was to preserve his energy for the later rounds and feared going all guns blazing would have affected his stamina.

"I have gotten to a point where I realised I give so much in training then it comes to fight night it's like 'you have got to figure out a way to preserve yourself through this fight'," he continued.

"I think that it got in the way of my fight with Terence Crawford. There is points where I should have been old school Shawn Porter.

"But I was like if I 'Go go go I won't have enough at the end' and I think that got in the way of my performance, it really did.

"Beyond that, I think it's just a communication thing, one side is 'hey, you're not giving it your all' and the other side is like 'I'm not going to tell you why I'm not giving it my all'".