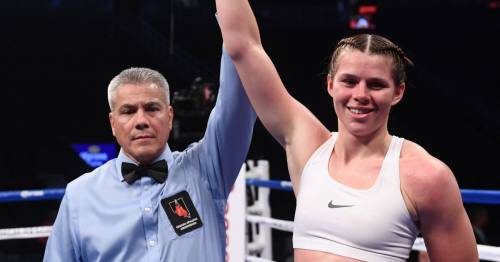 Making her pro debut on the undercard of ‘The Money Fight’ between new promoter Floyd Mayweather Junior and Conor McGregor should have been the perfect start.

Yet that evening in August 2017 at Las Vegas’ T-Mobile Arena did not go as planned for Savannah Marshall.

Marshall fought in front of an empty arena before missing one of the biggest fights of all time because of a mix-up over tickets.

“I was on at about 4 o’clock and there were about 10 people in the arena,” she told Mirror Sport after a training session at Hughie Fury’s gym. “They didn’t even play any ring walk music! That’s the other side of it.

“I got three tickets and I gave them to my mam, my dad and my sister.

"After I won and got back to the changing rooms, within about 10 minutes there were bouncers at the door, saying ‘you need to leave because you don’t have a ticket’.

“I rang my manager and he said ‘I gave you three tickets’. I said I gave them to my mam, my dad and my sister and he said ‘no, they were for you and your two coaches’.

“I got escorted out of the building, so I didn’t even see the main event. My mam, dad and sister were sat there all night even though they don’t really like boxing.”

That experience summed up her disappointing time with Mayweather and she returned to Britain a few weeks later.

“I trained for three fights, but all three of them fell through,” she recalls. “I spent more than I earned. In the end, I couldn’t afford to stay there and came back.”

Marshall, 30, teamed up with trainer Peter Fury and beat Hannah Rankin to claim the vacant women’s WBO middleweight title a year ago.

The Hartlepool fighter, who incredibly has no kit supplier, makes her second defence against Zambian Lolita Muzeya at Newcastle’s Utilita Arena on Saturday and has her old rival Claressa Shields in her sights.

Marshall is the only person to beat the self-proclaimed GWOAT – Greatest Woman Of All Time – and defeated her in 2012 on her way to becoming the first British woman to triumph at the world amateur championships.

Shields has claimed Olympic gold in 2012 and 2016 and world titles at three different weights and is desperate to avenge that loss.

They should finally meet because they are both part of Sky Sports Boxing’s new stable and Marshall says the American is insecure deep down.

The unbeaten Marshall, who is 10-0, said: “She’s very hot-headed, I think she projects her insecurities a lot.

“If someone mentions Claressa Shields to me, I’ll say brilliant boxer, I’d love to get it on with her.

“But when someone mentions me to her, all hell breaks loose. She starts effing and jeffing! Calls me worse than whatever.

“She’s done very, very well, but she only qualified for London 2012 because she lost to the eventual winner, me, at the world championships.

“I’m a world champion, so credit where credit is due.

“It would be great if we could finally get it on.”