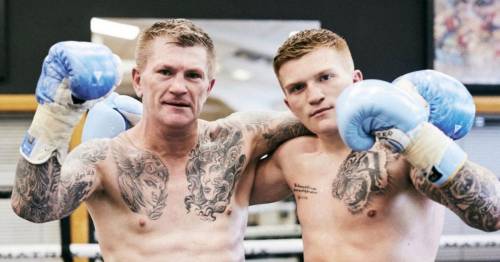 Ricky Hatton will now make his ring return on November 12, not July 2 as was originally planned.

The former two-division world champion was set to make his comeback against Marco Antonio Barrera at the AO Arena in Manchester in an event that would follow the Hughie Fury vs Michael Hunter fight set for the same night. But when Fury pulled out of his fight with an illness, the entire evening collapsed, costing Hatton his homecoming.

Instead, he will have to wait a further 19 weeks for his chance to fight again after losing around three-stone to get back into ring shape. The boxing icon hadn't competed in almost a decade, and had been losing weight in order to regain control of his mental health after a tough lockdown period.

"Another 6 rounds with my son Campbell Hatton today," he said in an Instagram post with a series of photos showing the pair looking in fight shape as they worked out. "Gutted the fight fell through. I’d worked so f***ing hard.

"But I’m staying at it, and and Marco Antonio Barrera will be back on November 12 in Manchester. The show still goes on, passing all my experience on to my son."

He added in a later statement: "I wish Hughie a speedy recovery, but obviously I'm gutted as I have been training so hard for this event. But I'll take a little break and be back fitter and stronger for the new date with the fans.

"We've all waited a long time for this fight, soI hope the fans can be a little bit more patient so we can be back with a bigger and better show."

Hatton had been angling to keep his portion of the event alive, but it became untenable after Fury pulled out of his fight. It is unclear whether or not the exhibition undercard, which was set to feature UFC legends Dan Hardy and Diego Sanchez as well as an influencer fight between rapper Casey 'Caspar' Walsh and model Don Strapzy.

Ricky Hatton was sparring with his son Campbell for the comeback
(

Are you disappointed that the Ricky Hatton comeback fight has been rescheduled? Let us know your thoughts in the comments section below!

"Sky are out broadcast partner and BOXXER brought some incredible talent to the bill," said Mike Jones, whose company Europa Combat were promoting the Hatton portion of the event.

"So when we were forced to put the event on hold, with just two weeks to go, we had no option but to follow their lead and postpone as well. We remain committed to that relationship and look forward to joining forces again a bit later in the year.

"Ricky has got himself into incredible shape and will continue to be an inspiration to people who may be struggling with their mental health or need to kickstart some energy into their daily lives. We're not going anywhere and we'll be seeing fans a bit later this year for a truly spectacular night of entertainment."