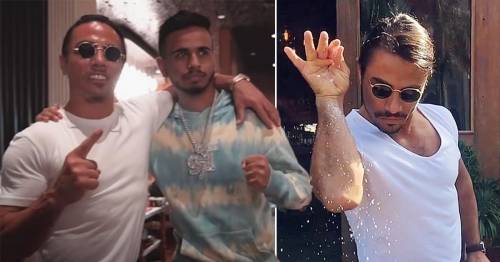 Social media star Salt Bae has said that he wants to become the next influencer to move into boxing.

The Turkish restaurateur, whose real name is Nusret Gokce, has amassed a huge following of over 60million people across his social media pages after becoming a viral meme in 2017.

His method of seasoning food earned him the nickname, and he has gone on to parlay that fame into a number of massive restaurants, including his famous Nusr-Et Steakhouse in London.

Diners have been known to be charged as much as £850 for a steak at the venue, with a number of celebrities making appearances at the notorious restaurant.

And he has told YouTube star Rashed 'Money Kicks' Belhasa that he wants to get into boxing during a visit to his Dubai location.

Belhasa looks set to face Floyd Mayweather in an exhibition bout next month atop the Burj Al Arab hotel, and in a video discussing the bout, he stopped by Gokce's restaurant for a meal.

The pair posed for photos and Gokce tells Belhasa that he "wants to get into boxing".

Not bothered by the prices, celebrities such as Belhasa, Wayne Rooney, David Beckham, and Naomi Campbell have flocked to Salt Bae's restaurants around the world.

Bills have reached as high as £37,000 for particularly hungry diners, with reviews in his London location unfavourable for a number of reasons aside from the prices.

Gokce would be the latest in a string of internet celebrities to make the switch into the boxing world after the success of YouTubers such as KSI or Logan and Jake Paul.

The trend began in 2018 when British YouTubers KSI and Joe Weller fought at the Copper Box Arena in London after Weller had boxed Theo Baker for a video.

After KSI, whose real name is JJ Olatunji, won the bout, he called out America's top YouTubers at the time the Paul brothers, and he and his brother Deji faced them later that year in Manchester.

Would you like to see Salt Bae in the boxing ring? Let us know your thoughts in the comments section below!

And when Jake Paul won his fight with KSI and Logan drawing theirs, the trio all went professional in the following years for their next fights.

KSI ultimately defeated Logan Paul in a Los Angeles rematch in November of 2019, while Jake Paul has gone on to become one of the most divisive figures in the sport, amassing a 5-0 record with four KOs.

The younger Paul brother started his career with a win over social media star AnEsonGib before beating basketball player Nate Robinson in brutal fashion to establish himself in boxing.

His brother Logan competed in an exhibition of his own with Mayweather last year at the Hard Rock Stadium in Miami, lasting the eight round distance with no winner declared.

Previous : Gran, 77, forced to wait 28 hours for treatment in A&E after fall ‘could have died’
Next : Eddie Hearn provides Tyson Fury vs Dillian Whyte update ahead of purse bids