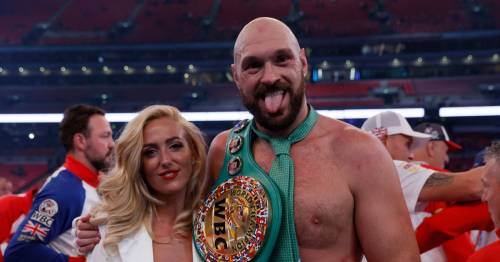 Tyson Fury's own wife Paris, who begged him to retire last year, doesn't believe that he's serious about his plans to hang up the gloves.

The world heavyweight champion continues to insist that he will only come back to professional boxing for the lofty sum of £500million, which would be unsustainable for even the most wealthy of investors. But even his wife is dubious of his claims after she asked him to quit the sport after his win over Deontay Wilder in October.

Fury has been enjoying his life without fighting of late, bringing Paris and their family to the South of France on holiday and generally relaxing in their luxurious Morecambe home. But he hasn't stopped training, and admits that he works out intensely and even spars in his gym.

“I'd like him to retire," Paris told Piers Morgan on his Talk TV show last night. "But there's something in the back of my mind saying he's itching for another fight. It's there – woman's instinct, there's something still calling him out there.

“As the wife, I just look and wonder ‘are you done?’ I hope he is. I hope he chooses another path but honestly, I think there is a question mark there.”

The heavyweight champion is undefeated in his 33 professional fights, and at just 33-years-old still has a number of major fights available to him. He has been the unified WBA, IBF and WBO champion, and currently holds the WBC belt, but would need to beat the winner of Oleksandr Usyk vs Anthony Joshua 2 taking place this summer to become undisputed.

But unlike legendary champions such as Floyd Mayweather, Fury has taken damage during his 32 wins, and was famously viciously dropped in his one draw with Deontay Wilder. After stepping into the ring with the dangerous power puncher three times, Paris wanted him to leave the sport, but she has a bet with his lawyer that he will continue.

“After the first fight with Deontay Wilder I begged him not to fight again," she said. "And then he fought again and now he's saying he’s quit again. I just don’t think it's the end. I just wonder. You never know, we’ll wait and see.”

Do you want to see Tyson Fury fight again? Let us know your thoughts in the comments section below!

For his own part, Fury has continued to insist that his career is over. After a series of interviews and being pressed hard during TalkSPORT's White and Jordan show yesterday, he continued to claim that his comeback would cost half-a-billion, joking that he would accept that number in dollars or pounds.

"AJ [Anthony Joshua]’s bubble’s been burst, he’s been beat twice. He isn't a virgin anymore, he’s been battered from pillar to post by a fat man on three weeks’ notice and by a middleweight. If it’s half a billion, then I won’t say no, will I?

"What you’ve got to do is go and get half a billion and then the Gypsy King will come out and solve all his problems for him. Because if AJ gets beat again off Usyk, then there’s only going to be one man to redeem this great fighting nation of the United Kingdom. I can solve all the problems, the embarrassment and all that stuff that’s going to happen."