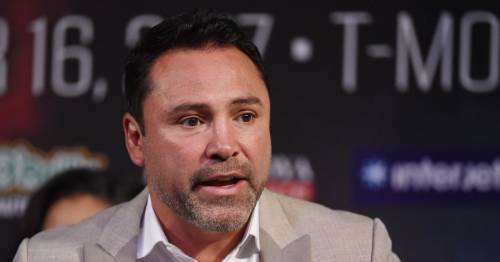 Oscar De La Hoya will make a long-awaited return to the boxing ring in September when he faces former UFC light heavyweight champion Vitor Belfort in a historic bout.

The fight, between 48-year-old De Lay Hoya and 44-year-old Belfort – is set to be a sanctioned professional contest, taking place at Staples Center, Los Angeles over eight two-minute rounds at 180lb.

The boxer formerly dubbed as 'Golden Boy' has not fought for over 13 years, with his last action in the boxing world dubbed a 'domination' after he retired in the eight round against now boxing legend Manny Pacquiao, a contest which was largely seen as a passing of a generational torch.

And now after taking on the promotion of fights full-time with his label Golden Boy Promotions, he looks to set climb back theough the ropes following a rather dramatic post-fight career…

Oscar De La Hoya was born into a tough fighting family with his grandfather, brother and father all competing in a boxing ring as part of a working class set-up that had resulted in their emigration from Mexico before his birth in Los Angeles.

He was always set for a top career in boxing with a wealth of experience around him, and the American's meteoric rise began from winning the junior Olympic Games at 119 pound at the age of just 15, immediately proceeded by a tremendous amateur pedigree backed up by 234 victories including 163 stoppages, which sent the boxing elite on to red alert across the Atlantic.

Shane Mosley was one of the four opponents he could not conquer as a youth, tasting defeat twice which set up the later rivalry between the pair that also resulted in two defeats for the young star, but his career was set to really take off in the months that followed.

A career highlight came at the 1992 Summer Olympics where he was considered to have 'brought the sport to its feet', with an early dream to fulfil his mother's dying wish, after she was diagnosed with terminal breast cancer.

He defeated a previous amateur nemesis Marco Rudolph to win the gold medal with his story becoming widely publicised, branded by the media as 'Golden Boy' ahead of his new beginning mixing it with the best in the professional ranks and realising a lifelong ambition. 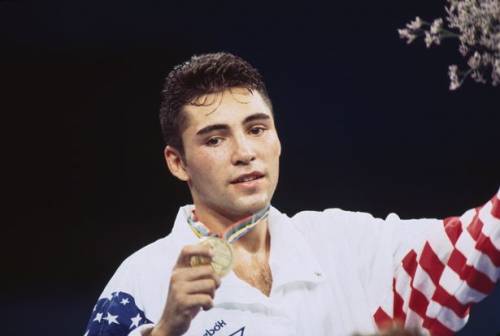 Announcing himself to the world at the age of just 19, De La Hoya made a switch to a professional career, with his jump already scrutinised heavily by the watching world and his first fight sent early shockwaves across the boxing world blasting out Lamar Williams with a first round stoppage.

This early statement of explosive intent ignited a sequence of wins for the star in the making with only a brief blip on his resume where he was heavily criticised for being 'over-dramatic' after pulling out of a super-lightweight bout scheduled on ESPN at junior lightweight.

However this would not derail his shot at a world title, where he won his first belt aged 20 producing a historic stoppage over the previously undefeated Jimmy Bredahl and earning his stripes as a well-respected contender.

This would soon be followed by a successful title defence, then a transition to super lightweight where he immediately became a two-weight world champion in just his 14th professional fight by emphatically despatching of Jorge Paez at the MGM in Las Vegas as his profile continued to increase at world level.

His plethora of success continued to expand, as he unified his lightweight belts and looked ahead to a light-welterweight switch defeating Mexican legend Julio Cesar Chavez to become unified champion before moving up again to welterweight, where a crucial part of his blossoming career evolved.

With his path clearly growing to legendary status and super stardom, De La Hoya was to suffer his first defeat to amateur foe Mosley after successfully becoming lineal world champion with seven successful defences, on a resume that included Cesar Chavez once again, and Felix Trinidad.

The American prodigy was not left and despite an earlier rape scandal, he would resurrect his world title form with a victory over famous Arturo Gatti before losing to Mosley again later down the line with the undisputed title on the line.

A soul-destroying first stoppage defeat to Bernard Hopkins after a crushing liver blow, would signal a 20-month lay off and the start of the end of a world-class career, despite a last hoorah becoming world champion in his twilight years. 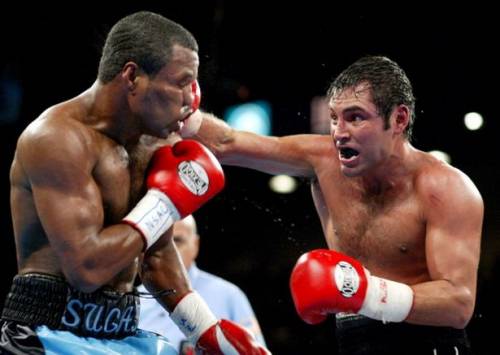 An extended time away from boxing signalled a concluding four fights to add to his star-studded resume which featured the now hall-of-fame pair Floyd Mayweather, a grinding victory against Steve Forbes followed by his curtain-closing battering at the hands of Pacquiao.

De La Hoya's fight with Mayweather represented the initial changing of the fighting guard in America, coming into the bout as underdog and leaving defeated after a heartbreaking split decision on the night under the lights of Vegas once again.

With a well-fought victory over Forbes earning him a last celebratory shot with Pacquiao, his career was brought to an emphatic close with the Filipino pummelling De La Hoya with damaging shots that caused the corner to throw in the towel on his elite career. 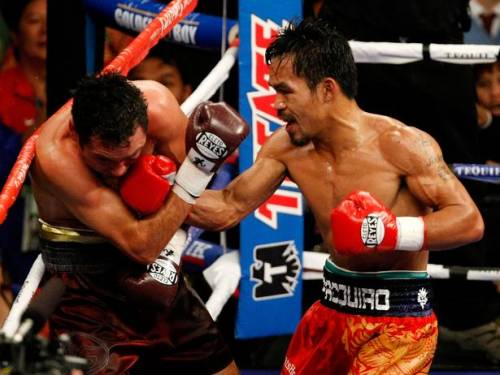 This would act as a final goodbye to the sport for 'Golden Boy' with Pacquiao and Mayweather set to dominate the sport for years after, but his popularity and determination to succeed would leave a permanent legacy despite issues beyond the ropes along the way.

De La Hoya announced his retirement from the sport in 2009, rounding off his time in the professional game with eleven world titles in six different weight classes, and a huge respect and admiration from fans all across the world who flocked to see him in numbers.

This ended any speculation of a return to face rival Cesar Chavez, but he would later fight in an exhibition on national television with basketball star Shaquille O'Neal with the reality of normal-life after boxing setting in for such an active fighter, whose warrior instincts would have to be repressed.

Despite a hugely successful career fighting in the sport, controversy was bound to hit with the media scrutiny on De La Hoya's personal life coming to the fore especially in the later years as defeats and verbal exchanges started to increase.

"A bad time in my life," he said. "That’s it. That happened, what, 10 years ago? They’re still popping up, but that’s the power of the social media."

The American was bombarded with questions and featured prominently in the headlines, after images surfaced of the star wearing fishnets and high heels during 2007 as his career started to plateau.

During his time as Golden Boy Promotions president in his current role, the American former fighter has been forced to reject claims that this undue attention affected his role as a promoter and re-addressed the issue.

"No, no, no," he said. "We’re the best promoter in the world today," he told The Breakfast Club

"So it has nothing to do with it. It just has something to do with my personal life at that time, which was 10 years ago. In America, you have the opportunity to rise and shine and get better and be better, and so that’s exactly what I’ve done."

He faced legal action at the time of the photos being published, embroiled in a battle with author Mila Dravnel who filed a lawsuit, but later withdrew it despite the former world champion admitting he was present in the shots. This led to another catastrophic turn in his personal life, as it opened a gateway to substance abuse.

“Let me tell you, yes, yes, it was me (in those pictures),” De La Hoya. “I am tired now of lying, of lying to the public and of lying to myself.” 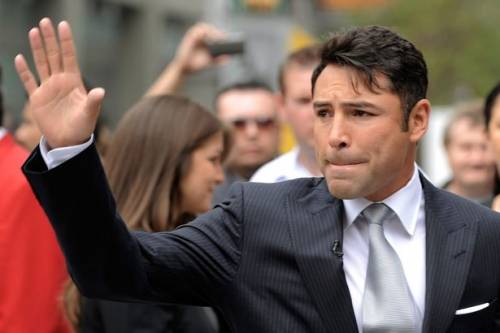 With the cross-dressing attention causing a damaging effect to the star's mental wellbeing, the American resorted to substance abuse binging alcohol and drugs such as cocaine after his career took a turn for the worse in it's latter stages.

He admitted he was suffering as he struggled to come to terms with the negative side of fame.

"After doing an honest evaluation of myself, I recognise that there are certain issues that I need to work on," stated De La Hoya.

"Like everyone, I have my flaws, and I do not want to be one of those people that is afraid to admit and address those flaws."

This immediately followed a period in a rehab for alcoholism, from which he returned promote the huge clash between Mayweather and Canelo Alvarez in 2013.

And his struggles continued over his time as Golden Boy president, as he was arrested as recently as 2017 for driving under the influence of alcohol followed by another public admittance of cocaine use during an extortion investigation in 2019. 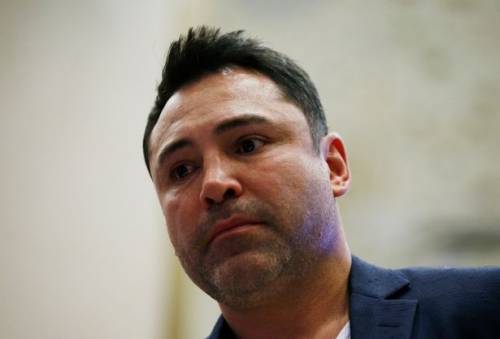 De La Hoya was in and out of rehabilitation as he struggled with substance abuse after retirement.
(Image: Action Images via Reuters / Andrew Couldridge)

Despite the threat of spiralling into bad health, De La Hoya has not given up just yet and has more than a puncher's chance now of returning to the game.

He spoke out publicly in 2020 revealing his ultimate ambition to return to the ring and relive his glory days, calling out middleweight Gennady Golovkin and revealing he felt in the best shape he had been in for several years.

"I'm 90 percent positive that I'm coming back the first quarter of next year," he told DAZN.

Despite intense exhibition links with other fighters including current pound-for-pound king Alvarez and former opponent Mayweather, The American is now set to face Belfort in a remarkable comeback to the ring after much personal turmoil.

However links have intensified that the fight will add to his current professional record, with Belfort already 1-0 in the professional ranks following a career in mixed martial arts.

Previous : Dramatic new image shows how Ben Needham would look now 30 years after he vanished – World News
Next : Twenty everyday things you should never leave in your car during the heatwave