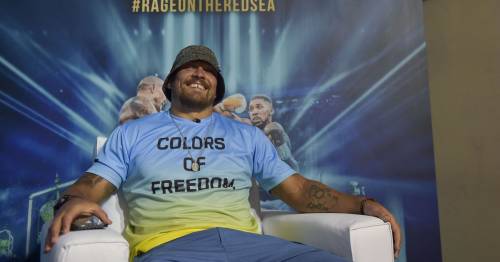 Oleksandr Usyk’s “freedom” message for Ukraine amid invasion from Russia

Oleksandr Usyk wore a Ukraine-styled t-shirt with the words "colours of freedom" written on it during media appearances ahead of his press conference with Anthony Joshua today.

Usyk came face-to-face with Joshua in Saudi Arabia this afternoon ahead of their rematch on August 20 at the Jeddah Super Dome. The former undisputed cruiserweight king outpointed Joshua to win his heavyweight belts last September in London.

The pair were expected to meet in a rematch ever since the fight, but a Russian invasion in Usyk's home country put his boxing future in jeopardy. Whilst fighting on the frontline against Russian attacks, Usyk experienced soldiers shooting at his house and saw his neighbours being dragged from their homes.

Usyk eventually agreed to the fight again after his time on the front lines and a rematch with Joshua was subsequently announced, despite rumours the Ukrainian was in talks to fight Tyson Fury in an undisputed clash.

Who wins the rematch – Oleksandr Usyk or Anthony Joshua? Let us know your thoughts in the comments section below

Oleksandr Usyk ahead of his fight with Anthony Joshua
(

Talking at the press conference in Jeddah today, Usyk said: "As we all know we are not in the best conditions at the moment back at home, but we are doing what we have to do, we are doing our job. Together with my team we are working hard to achieve our goals.

"I never made some very loud and bright speeches, all I did was just work hard in my training camp in my gym. That's what I'm going to do until the date of the fight, and then I will enter the ring and make you happy with my boxing."

Usyk opted to bravely return to home soil to take up arms and defend his country against Russian invasion alongside fellow fighter Vasyl Lomachenko and Wladimir Klitschko. However he returned to training after delaying his heavyweight rematch with Joshua from its original contracted April date.

Joshua will be looking to regain his unified crown for the second time in his career having avenged defeat against Andy Ruiz in the same venue back in 2019. The winner will likely be in pole position to challenge WBC champion Fury for the undisputed titles despite his claim he would need £500 million to return to the ring.