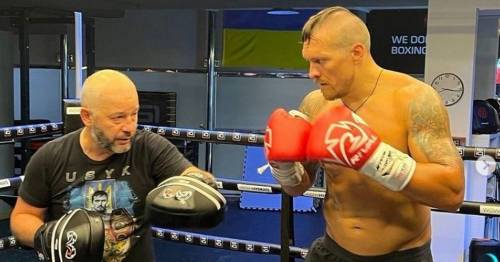 Oleksandr Usyk has been backed to knockout Anthony Joshua in their rematch after recent pictures of the heavyweight champion's physique have emerged.

Usyk's rematch with Joshua, which was officially announced for August 20, will take place at the Jeddah Super Dome in Saudi Arabia.

The fight is being marketed as the 'Rage on the Red Sea' as Usyk will attempt to defend the titles he won against Joshua last September. The Ukrainian said of the announcement: “I have a goal, with the help of the Lord I will complete my mission!”

Fans have weighed in on the rematch after Usyk posted a picture of himself training in the gym. Many are impressed by the Ukrainian's muscle gain and think he will win more decisively in the rematch.

One user wrote: "He absolutely battered Joshua and was lucky not to KO him," another added: "From [round] one, he boxed his head off with angles. I'll be very surprised if Joshua can KO him."

A third user believed that Usyk didn't show his full skillset against Joshua in the first fight, writing: "Anthony is getting stopped this time I feel like Usyk took it easy on him. Another put: "I feel bad for AJ. Usyk will destroy him."

"This guy's boxing IQ is in another stratosphere to Joshua," a fifth user wrote of Usyk. "I’m leaning towards Usyk KO – He is massive, AJ is getting stopped in 8 rounds," a final commenter added.

Joshua has partnered up with Robert Garcia for the rematch after parting ways with longtime trainer Robert McCracken. 'AJ' has the chance to become a three-time heavyweight champion if he can avenge his loss and reclaim his titles against Usyk.

Who wins the rematch – Oleksandr Usyk or Anthony Joshua? Let us know your thoughts in the comments section below

"What an opportunity. Fighting championship level back to back has had its pros and cons, but I decide every day to get stronger, to learn from my experiences and grow. A happy fighter is a dangerous fighter and I am the happiest and most motivated I have been."

Previous : Boy, 12, has bones that can shatter at the slightest touch like he’s ‘made of glass’ – World News
Next : Logan Paul claims Floyd Mayweather owes him as much as £4million for exhibition fight