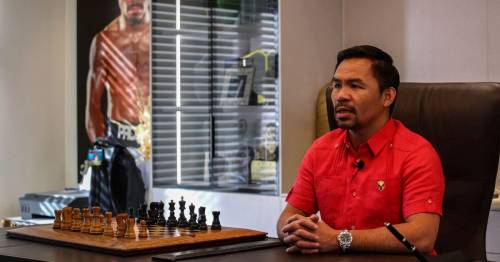 Manny Pacquiao has admitted he was naive when previously using drugs but has vowed to reduce the use of illegal substances in the Phillipines.

The former eight-division world champion is currently running for presidency in his home country after hanging up his gloves earlier this year.

He shocked the world by previously admitting to the use of marijuana and crystal meth when he was a teenager.

And Pacquiao has vowed to ramp up prison sentences to combat the problem during his proposed presidency.

"We have to put in jail those who are using drugs, selling drugs – that's what the law says," he told AFP.

Manny Pacquiao previously admitted to drug use in 2016
(

"Before, I'm naive, that's why I use drugs. I don't know the law, nowadays people they know already that the law is not allowing the illegal drugs."

Pacquiao has been seen in the past to heavily back current president Rodrigo Duterte's brutal plan to eradicate drug issues.

And in his plan to succeed Duterte, Pacquiao has vowed to remove the bloodshed from the war against illegal substances offering them right to a fair defence.

His comments about his own personal use of drugs during his boxing career were a shocking revelation to his army of fans back in 2016.

And he admitted to being a regular drug user during his teens.

"The president, he doesn’t know my experience with drugs," Pacquiao said in 2016. "He always gives a chance to people who want to be changed.

Where do you rank Manny Pacquiao in your all-time fighter list? Let us know in the comments section below

Pacquiao is widely considered to be one of the greatest fighters of all time having hung up his gloves following his defeat by Yordenis Ugas in August.

The 42-year-old will now focus on his political career and has thanked fans for playing a part on his elite boxing journey.

"I just heard the final bell. Boxing is over," said Pacquiao on his retirement. "I will never forget what I have done and accomplished in my life.

"Thank you for all the wonderful memories. This is the hardest decision I’ve ever made, but I’m at peace with it. Chase your dreams, work hard, and watch what happens. Good bye boxing."