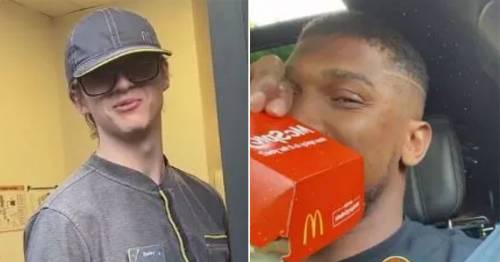 Anthony Joshua might be one of the highest-paid athletes in the world, but that didn't stop him cheekily asking for a free burger during a recent trip to McDonald's.

Joshua's net worth will nearly double when he fights Oleksandr Usyk for the second time in July. The former heavyweight champion will earn £100million for the rematch, taking his net worth to astonishing £215m with just one night of action.

But Joshua shocked a McDonald's employee in his hometown of Watford by asking for a free burger whilst with his six-year-old son JJ. 'AJ' said to the worker "You good yeah?" to which they replied: "Yeah, I’m good."

Joshua then surprised the employee by asking: "Listen, throw an extra burger for me please? You got me?" The worker then replied: "Pardon?" After repeating the request, the staff member asked Joshua: "What one?" to which he replied :Any one, you surprise me."

What do you make of Anthony Joshua asking for a free burger at McDonald's? Let us know in the comments section below

Fans have since weighed in Joshua asking for a free burger despite being a multi-millionaire. One user wrote: "I don’t know why he needed to ask for a free one. He has got all the money in the world."

Another user slammed 'AJ' and pointed to the recent increase in living costs, stating: "There are people struggling to buy food at the moment because of the cost of living crisis. Yet he is blagging free food. Also by putting it on Snapchat, the McDonald’s worker could get in trouble.

Asides from his recent McDonald's trip, Joshua is looking to become a three-time heavyweight champion on July 23 as he is pencilled in to fight Usyk. The fight looked to be taking place at Wembley or Tottenham Hotspur Stadium, but Saudi Arabia have reportedly forked out £90million to host the title clash.

Joshua's upcoming fight was put in jeopardy after Usyk travelled to his native Ukraine to defend the country from a Russian invasion, but Usyk has since begun his preparations for the rematch and expects to sign the contract "very soon"

“We’re currently looking into the contract and if everything is okay we’re going to sign it very soon,“ he said during an appearance on the Block Party YouTube show. “If everything goes well, yeah we’ll select the exact date soon. Of course, what’s going on currently in Ukraine will motivate me a lot in the gym, in training sessions and of course during the fight."

Previous : Girl, 4, died after scorpion stung her twice when mum failed to notice the first – World News
Next : Mike Tyson to open talks with Jake Paul this week over $300million boxing fight