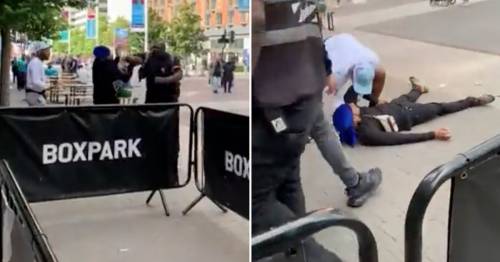 Julius Francis has confirmed his security licence has been suspended after knocking out a rowdy customer in London.

The former British heavyweight champion came back into the headlines, after footage went viral of him sparking out a heckling customer with one-punch while working as a security guard. Metropolitan Police opened up an investigation into the incident and later confirmed that no further action would be taken against Francis.

However Francis has revealed he would like to return to working as security soon despite word gathering pace of a boxing comeback. “I was arrested and rightly so and I was taken to the police station for about four-and-a-half hours," Francis detailed to TMZ when discussing the viral incident. "The guy came up to me and he'd already been violent, struck a couple of doormen, pushed them, punched them, went at a couple of patrons.

"As that happened he turned around and made a B-line to me. He was calling me names… it doesn't harm me, but I have the right to defend myself. They had statements from my manager, people at the door and they looked at our CCTV. I wasn’t worried so much about that because it was actually me defending myself.

"I had the right to defend myself and that’s what I did when he raised his hands. The security authority industry called the SIA actually suspended my licence to work. I can't work at the moment, so I'm trying to get that sorted so I can get back to work as soon as possible."

Francis shared the ring with the likes of Vitali Klitschko and Tyson during his career which reached its pinnacle when he became British and Commonwealth heavyweight champion. His name was thrust back into the headlines after the incident which saw him burst from the periphery to knock out the rowdy customer with just one-punch.

Would you like to see Julius Francis step back in the ring? Let us know in the comments section below

Footage showed the customer heckling security at the London venue before Francis emerged to swiftly deal with the altercation. His popularity has increased after the video went viral with heavyweight champion Tyson Fury even backing Francis.

The former heavyweight was subject to police investigation but was not sacked from his job at BOXPARK having been backed by the chain's founder Roger Wade. It is likely he will return to a job with Wade leaping to Francis's defence in a glowing statement. "I woke up to a viral story about one of our security team," Wade wrote in an official statement. "Julius Francis is the ex-UK heavyweight boxing champion, he is one of the nicest people I have ever met and helps train young underprivileged kids boxing in his spare time.

"My understanding is that Julius and our security team spent 15 minutes stopping this man and his friends from abusing, spitting and hitting our customers and staff. Acts of violence or abuse to any staff members should never be tolerated. How would you react if someone approached you violently? #IstandwithJulius."