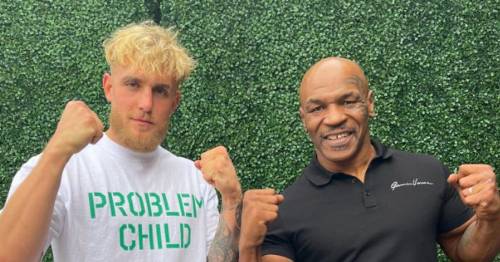 Paul has repeatedly called out Tyson for his next fight, but the former undisputed heavyweight world champion said he would only face the YouTube star if their fight came close to breaking a pay-per-view record. Both men are friends and speak highly of each other, with Tyson crediting Paul's path into the boxing world.

A fight between the pair is making steady progress as 'Iron Mike' said he is going to call Paul on Friday to discuss the clash. "I'm going to call him sometime Friday and we're going to talk, absolutely" Tyson said on the Club Random Podcast. Paul fights at 192lbs but said he would move up to heavyweight to face Tyson in a bout that he thinks is worth over $300million.

Do you want to see Mike Tyson fight Jake Paul? Let us know in the comments section below

Tyson has previously admitted he wouldn't be able to knock out Paul if they fought because his family love the social media star too much. 'Iron Mike' has praised Paul as a great salesman and promoter, adding: "I don't look at him the way society looks at him, I can't even say what they call him.

"He's a fighter but they don't want to credit him as being a fighter. He can fight and everybody wants to kick his a** because he p***** everybody off. He's a great salesman and promoter, he doesn't even know it. He's just a natural great promoter."

Paul thinks by mixing two generations of boxing the fight will sell millions of pay-per-view. The current highest-selling pay-per-view is 4.6 million and 'The Problem Child' thinks a fight with Tyson could come close to that number.

Paul fought on the undercard of Tyson's comeback against Roy Jones Jr in 2020. The event was a huge success on pay-per-view, selling 1.6million buys.