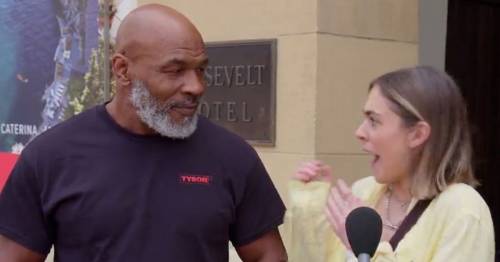 Mike Tyson has hilariously creeped up behind a fan who claimed Conor McGregor would beat him in a fight.

The boxing legend has not competed in the ring since facing Roy Jones Jr in a hugely successful exhibition bout back in 2020. However he has refused to rule out stepping back in the ring and is planning to hold talks with YouTube star Jake Paul over a return.

During an appearance on the Jimmy Kimmel show, Tyson was shown in a segment coming up behind fans who were asked questions about the legendary heavyweight. Throughout the clip they were asked an array of questions including: "Who would win in a fight – Conor McGregor or Mike Tyson?" An Irish fan quickly responded: " That's a difficult question. I don't know they both have the aggression. I am going to have to go with Conor because he is Irish though."

Tyson hilariously creeps up behind her while listening to the assessment before the fan turns to her right to see the legendary heavyweight stood menacingly. She promptly leaps away in a shock before sharing a laugh with the 55-year-old who is jokingly annoyed by the claim.

Several other fans were asked question during the segment with boxing legend Butterbean also asked whether he would step in the ring and fight Tyson in his prime. Tyson creeps up behind the star who has got into new shape before the pair jokingly start trading punches.

McGregor is considered arguably the UFC's biggest superstar but has not yet made a return to the octagon since breaking his leg last year. However has made a return to training and has offered fresh hope that he could make a comeback this year after practicing kicks on the heavy bag.

Who should Conor McGregor face on his UFC return? Let us know in the comments section below

The Irish star has just one win in his last four outings which came against Donald Cerrone two years ago, and he is eyeing a return to 170lb after two fights at 155lb. McGregor believes he can challenge division champion Kamaru Usman who has yet to be defeated since claiming the title in 2019.

However boxing legend Tyson has advised the star to appear in a tune-up fight before targeting the title belt in a third weight class. "Even if he wins, he’s gonna get hurt in the next fight and he can’t fight the next fight [after that],” Tyson said on The Fight Card podcast.

"You get your experience down, three more fights, you feel good. The last two guys are really qualified opponents, now you go back out there. I'm a strong believer that after a defeat you should do a couple of fights to get your feet wet. Conor, I think you should build your confidence up and go do what you do, win excitingly.” McGregor has several options should he elect to return in a warm-up fight including lightweight contenders Tony Ferguson and Michael Chandler.