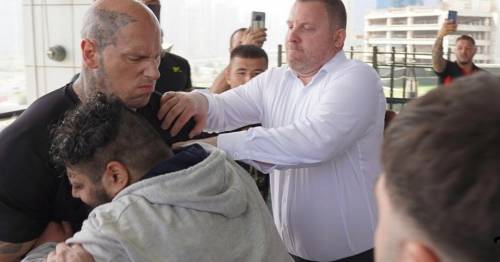 Martyn Ford was told his rival Iranian Hulk was a "six-foot-four monster" before meeting him in Dubai during their first face-off.

Ford's boxing debut against Iranian Hulk – real name Sajad Gharibi – was cancelled amid fears over the Iranian's "mental wellbeing". The pair had come face-to-face in Dubai prior to their scheduled meeting with the Brit sending his rival 'flying' during a heated altercation.

The 39-year-old has admitted he later turned to members of his team and ruled out stepping in the ring with his rival. “We were told from guys on the ground in Iran that this guy was huge," Ford told Mirror Fighting . "Not as big as in his photos maybe but that he was massive. Six foot three or four monster is what we were told.

"He was exactly what we wanted, someone who isn’t a professional boxer but with the physical prowess to be dangerous. This is where we came to Dubai and had the confrontation. As an outsider people might say ‘what are you on about?’ From someone who was there who saw him and the way he crumbled. We had a face-off and it was one little push. I looked in his eyes and then turned around and said to the guys ‘there is no fight’.

“For me I couldn’t have stepped in the ring and then looked at myself in the mirror the next day knowing what I had done to him. Then I had a situation and the hardest thing for me was knowing there is investment in a lot of time and money from myself and other people, friends and family who are invested.

Ford and Gharibi later sat down for a press conference where Gharibi became angry again, launching a tub of popcorn in an attempt to confront his rival. After the pre-fight build-up, Gharibi returned home where he broke down in tears on national television after being disowned by his parents.

The Iranian star had also "wished for death" during a series of worrying social media messages before Ford offered him an early chance to withdraw from the bout. However the British star has now claimed he wouldn't have gained anything from stepping in the ring with Gharibi.

"To see how he crumbled and how people reacted to what happened to him, I knew exactly what was going to happen if we stepped into the ring," Ford continued. "Everyone knew that I would go in there hurt that kid humiliate him very quickly and it would be a complete no contest. I was twice the size of him, twice as quick and aggressive, he had trained but I don’t know what he was doing. I don’t know what was in his mind."