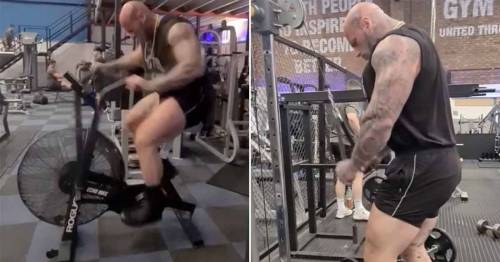 The 'World's Scariest Man' Martyn Ford has joked he looks the skinniest he's ever been despite weighing 322lbs.

The British giant is continuing to train hard after the cancellation of his boxing debut against fellow strongman Iranian Hulk, real name Sajad Gharibi. Ford is still keen on fighting in the coming months and is searching for a new opponent.

After claiming his fitness training has recently gone to a whole new level" in the past few weeks, Ford said that he weighed 322lbs but joked he'd "never looked so skinny". Ford moved away from bodybuilding last October to prepare for his boxing debut, but despite putting down the weights he boasted he is "bigger than ever" after months of conventional boxing workouts.

Who do you want to see Martyn Ford fight? Let us know your thoughts in the comments section below

"So figure this, I stop all forms of bodybuilding since October. I move into boxing, and combat sports training. I end up looking bigger than ever. I give up, want to pack on muscle? Go for a run, my body definitely doesn't function normally," he wrote.

Ford weighed 360lbs and ate 8,000 calories a day before losing weight for his boxing debut. He shed off the pounds by cutting his calorie count by almost half and carrying out intense cardiovascular work such as the Wattbike.

Getting down to 302lbs before Gharibi pulled out of their fight over mental health concerns, Ford said his weight loss had made him "feel 21 again". "Lifting big a** weights v boxing. 360lbs v 302lbs. Like anything I've done in life that I've really wanted to do, I've given absolutely everything and more. This is by far the best and healthiest I've felt in years, getting back to feeling 21 again is insane," he wrote.

The strongman has ditched weight lifting for boxing training

Fans have suggested that Ford should take on Thor Bjornsson in his ring debut after the Icelandic strongman's victory over Eddie Hall in March. Bjornsson would have a six-inch height and significant weight advantage over Ford. He also now has four fights under his belt whilst Ford is yet to compete in the ring.

Other fans of the Brit suggested he should fight five-time World's Strongest Man Mariusz Pudzianowski. The 45-year-old has an extensive MMA record and has been fighting for over a decade, boasting a record of 16-7 in the cage.

Previous : Justin Bieber tipped to be ‘next Jake Paul’ after taking boxing lessons
Next : Sinister house of serial killer who asked for death penalty preserved with creepy dolls