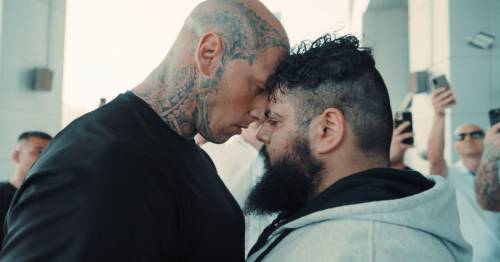 Martyn Ford was concerned Iranian Hulk would take his own life if he inflicted defeat on his rival in their ill-fated fight.

Ford was set to make his ring debut against Iranian Hulk – real name Sajad Gharibi – but the fight was shelved with the British star citing fears for his rival's "mental wellbeing". Gharibi had displayed some worrying messages in the build-up to the fight including a public "wish for death" posted on social media.

The British strongman has now revealed he had concerns during their heated altercation at the first face-off in Dubai. “This is where we came to Dubai and had the confrontation," Ford told Mirror Fighting when explaining the fight collapse. "I have genuine concerns about his mental health and how he’s feeling. It is who I am. I can't fight someone who I genuinely believe can take his own life after the fight.

"As an outsider people might say, ‘What are you on about?’ but from someone who was there, who saw him and the way he crumbled. We had a face-off and it was one little push. I looked in his eyes and then turned around and said to the guys, ‘There is no fight’.

"What happened afterwards I already felt bad about, the amount he got bullied and his reaction to being bullied breaking down on National TV. Then his parents came out and said 'we don’t want anything to do with you, you are weak'. Then on Instagram Live when he turned around and said he hates Iranians and wants to end his life. I just thought, 'No I can’t be a part of this’."

Gharibi had worried fans on social media after also claiming he had no coach during the build-up to the fight, before bursting into tears on national TV after being disowned by his parents. Concerns were also raised over his physical shape which he swiftly shut down by claiming he had lost 15lbs during his boxing training.

Who do you think Martyn Ford should fight next? Let us know in the comments section below

Ford appeared to suggest his rival was to blame during his original video statement where he planned to find a new opponent for his boxing comeback. The British star has now revealed his frustrations after losing his boxing debut, but is remaining active in the hope of discovering a new opponent.

“I’m a little bit frustrated and bored. But I am ticking on and doing what I can to keep myself active and busy," Ford added. "Focus is the main thing, when you have prepared for something and you are not able to go out and do it with the work I have put in it is frustrating. For me it is trying to find something as soon as possible to put that energy into something.

“I am still training, only thing I am not doing is active sparring. I have switched back into its resistance and explosive power. If something does happen which I am hoping I can sign up too soon, I have been training and dedicating so much time and effort to it."

Previous : March, memorial service to mark 30th anniversary of Westray disaster
Next : People in tears amid ‘disgraceful’ queues at Manchester and Birmingham Airports