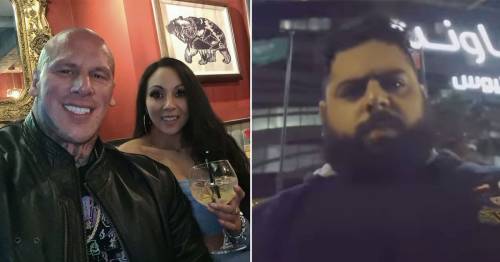 Martyn Ford feared he could face arrest if he returned to his hotel where Iranian Hulk had arrived demanding a confrontation in Dubai.

The British star planned to settle the score with rival Iranian Hulk – real name Sajad Gharibi – in the boxing ring but the fight was cancelled. The pair had exchanged verbal jabs in the build-up to the scheduled contest which included Gharibi sending a message to Ford after demanding a confrontation outside his hotel in Dubai.

Ford revealed he was having dinner with his wife to celebrate their anniversary when he was informed of the potential confrontation. "I was on a private holiday for me and my wife, I flew her out for a couple of days and I wanted to have time away from it," Ford told Mirror Fighting . "For me having respect for a sportsperson and understanding what an event is. I don’t want to fight on the streets in Dubai. He just wanted to look strong in front of all of his people.

"There was about six guys and him stood outside my hotel waiting for me to come out. That sums up the whole event for me. It was an absolute joke. Now if you are honestly wanting to do a professional fight, to stand outside like that when I am there with my wife. That is not boxing and that is not a role model.

"I understand he is upset and frustrated, to me that is something that is going to get someone hurt and potentially arrested. What is the point of me going out and meeting him and six guys in Dubai? What is going to happen? Worst case scenario I get done over by seven guys. Best case I do all seven guys and get arrested.

"I am a 40-year-old guy, I am not an idiot. I am not going to have a fight on the streets, I don’t want to be seen as a street fighter who is beating up bums in Dubai and never be able to come back there again because I have a criminal record."

Who would you like to see Martyn Ford face instead? Let us know your thoughts in the c omments section below

Gharibi was involved in several altercations with Ford during his time in Dubai including during the face-off, where he was sent 'flying' as the pair clashed. However the bout was later cancelled with Ford left extremely frustrated and appearing to suggest his rival was to blame.

Ford later alleged the fight was cancelled over "mental wellbeing" concerns with both men demanding a fresh opponent. The strongman has claimed his rival's lack of preparation shows disrespect to boxing. “I am done with talking about the guy because he has tarnished a lot of what I am trying to do," Ford continued.

"I don’t blame him individually but I think there is an element of responsibility he has to take. He didn’t train for it, he wasn't prepared for it and doesn’t deserve the opportunity at the moment to be honest. It is disrespectful to the fight game."

Previous : Vladimir Putin’s rumoured lover celebrates birthday as he flies to city she lives in – World News
Next : Floyd Mayweather insists he took no days off ahead of return to ring