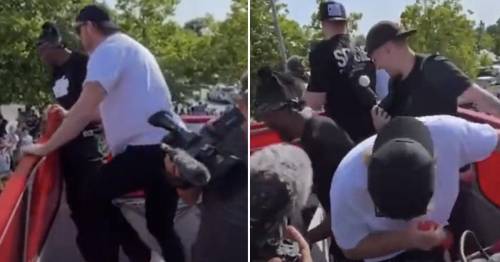 The YouTube star flew over to the UK to launch energy drink Prime which he created with two-time ring rival KSI following their previous rivalry. KSI – real name JJ Olatunji – has frequently traded verbal barbs with Paul's brother Jake and once even declared his hatred for the YouTube star while sat with Logan.

Paul and KSI were present during an open-top bus appearance at Watford ASDA to launch their drink on domestic shores. During the event a huge number of fans gathered to salute the social media famed pair who have a combined following of over 20 million. Chants broke out among the stars who screamed: "F*** Jake Paul " while his brother Logan stood with the British star.

Olatunji was seen laughing while Paul jokingly ducks down and avoids any chants being aimed directly at him. The YouTube star then clambers on to the top step of the bus as chants died down, before being met with erupting cheers from the growing crowd. Paul and KSI were later forced to cancel their next appearance in Leyton ASDA after the scenes in North London.

Paul previously fought Olatunji twice as the pair launched boxing careers with a draw declared in their opening white-collar meeting, before Olatunji won by split decision in their second clash. Immediately after the fight, KSI set his sights on a clash with Logan's brother Jake, and recently led the crude chant during an appearance at Capital's Summertime Ball at Wembley Stadium.

Despite previously having shared a rivalry with Olatunji, Paul believes his brother's rival saved his career when calling him out for their previous boxing clash. "I want to be able to say one day that KSI saved my career, but I made him a billionaire," Paul said on comedian Andrew Schulz's Flagrant podcast. "The drink has sold over 10million units in America, and launches in the UK over the coming days.

Who would win if the pair fought – KSI or Logan Paul? Let us know in the comments section below

"And I just don't feel like I lose, there was a line in a diss track I made where I said 'yeah, I took an L but I never really lose'. I can take an L but there's learning in that and I learned that KSI and I were like, f*** the beef, we're the same person just across the pond. In a weird way, we're really alike."

Previous : Mike Tyson comes up behind fan who claims Conor McGregor would beat him in fight
Next : Mike Tyson sets deadline for $300 million boxing fight with YouTube star Jake Paul