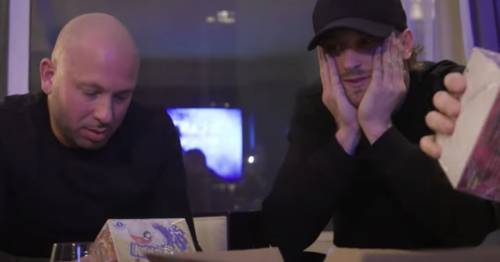 The YouTube star turned boxer has long been an avid collector and thought he had bought several boxes of first edition trading cards.

But trading card side Poke Beach, along with YouTuber Rattle, called the authenticity of the cards into question.

Paul flew to Chicago last weekend to have the cards verified for a second time by authenticity company BBCE.

And he has now released a video of the box of cards being opened as he discovered his fate.

Initial joy as to the contents soon turns to disappointment as one of the verifiers says: "Why are they so puffy? See how they're shaped all… they don't look great.

"See how they're curvy and puffy. They're very light… they don't look right"

Paul then notices something wrong and says: "Why are they bending like that? What's inside of them?"

The packs of cards are then opened to reveal a set of G.I. Joe cards.

One of the authenticators the says: "We got duped" while another claims it is "the biggest fraud in the entire history of Pokemon".

Paul then returns to his hotel room and says: "I'm a super-positive person, bro, and I'm always the one to look on the bright side, and I'm trying, but this is so hard.

Should Logan Paul return to the ring? Let us know in the comments section below

Paul has put his social media career on hold in recent years as he instead focused on his exploits in the ring.

He took on fellow YouTuber KSI in a white-collar bout in Manchester in 2018 before the pair renewed their rivalry a year later as professionals in Los Angeles.

Paul, whose brother Jake has established a record of 5-0 in the ring, has accused Mayweather of failing to pay his multi-million-dollar pure.

Mayweather is due to take part in another exhibition next month against YouTuber 'Money Kicks'.