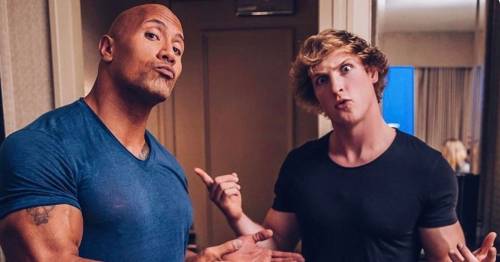 Logan Paul has admitted that he was heartbroken after being told to delete all traces of his friendship with WWE legend The Rock in 2018.

The YouTuber-turned-boxer was once friendly with the Hollywood megastar, with the social media star even appearing in promotional material for and a deleted scene from Baywatch in 2017. But their relationship was quickly ended amid controversy over Paul's infamous 'suicide forest' video in January 2018 that threatened to end his career.

Paul has kept the story of their relationship deteriorating quiet for years after being told that one day the pair could again be friends. But in a recent appearance on the True Geordie Podcast, he explained how the wrestler, whose real name is Dwayne Johnson, had a publicist call him to insist that he delete all photos of the pair together.

“After Japan happened, obviously found myself in a hole, rightfully so, that I had never been in before," Paul said in an emotional chat. “[I was] extremely low mentally.

"I got a call from my publicist who also repped Dwayne ‘The Rock’ Johnson and she’s like, ‘Hey Dwayne’s asked that you remove every picture and video that you’ve done with him. Maybe in the future the relationship can be reconciled but for now he basically wants nothing to do with you,’ which I also understood.

“I get it. You know, I made a grotesque error and he has had things happen in his life where like a lot of people that incident affected him in a personal way. So I understood it and that was the other part – you sleep in the bed you make, right?”

“But I just wish I’d gotten like a call or a text or something because I thought we had a healthy relationship, an open line of communication. And I was so sad that my hero wanted nothing to do with me. And I was sad because I understood it, I really f***ed up.”

Paul has gone on to generally rehabilitate his image after the controversial video, where he appeared to show the body of a suicide victim in Japan. And he has even come into WWE, taking on Rey Mysterio and his son Dominick at WrestleMania this year in a tag team match where he teamed with The Miz.

Logan Paul and The Rock were once pals
(

Would you like to see Logan Paul face The Rock at WrestleMania? Let us know your thoughts in the comments section below!

And he explained that since becoming a more palatable public figure, Johnson got back in touch. Paul went viral for a video where a monkey took a bottle of his energy drink Prime, to which Johnson replied in a private message.

However, the YouTuber refused to respond, and noted that the same publicist also works with comedian Kevin Hart. They never asked for Paul to remove any footage showing him with Hart during the controversy.

“I was so disappointed in myself, and so I vowed to get better," he continued. "I vowed to change, time passed, I start doing well… I just wanted to be able to build a relationship with Dwayne that didn’t end up happening.”

Previous : Single dad’s frantic plea to daughter, 7, as she lay dying after freak campsite accident – World News
Next : Jake Paul’s future opponents told they’ll “have to kill him to beat him”