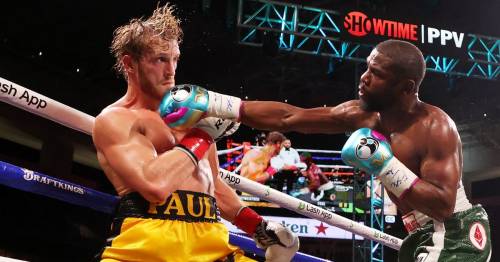 Logan Paul has again alleged that he is owed at least $2million (£1.6m) and possibly as much as $5m (£4m) by Floyd Mayweather for the duo's exhibition bout last year.

He also insists that it was Mayweather's team who offered him a rematch earlier this year – not the other way around, as the boxing legend claimed last week. The original fight drew over 1million viewers on pay-per-view and was considered something of a financial success, but the contest was lacklustre and likely wouldn't draw as well a second time.

Paul, 0-1 as a professional after losing to fellow YouTuber KSI in his sole fight, upset the odds by going the eight-round distance with Mayweather, with no winner being announced. But he had been allowed to weigh in 35lb heavier than his opponent as part of a series of strange work-around rules to make the mismatch more even.

But the social media star claims that he wasn't paid fully for the bout, having reportedly earned a monstrous purse. Asked for an exact figure, he told True Geordie during an appearance on his podcast: "My guess is between two and five mill, conservatively."

"This motherf***er," Paul continued after Geordie responded that Mayweather has claimed he did pay his rival. "Sure I've 'been paid', not in full. Technically, you're right dude but where's the rest of my money.

"This will be settled, I'm young dude and I've got time, I've got f***ing time to troll, to settle a civil lawsuit – he's just a big spender, he can't spend like that."

Mayweather is often joked about for his catchphrase that he has made "smart investments" throughout his career. But Paul believes that there's a chance his lack of payment could be due to financial issues that the boxer is having after retiring from the sport as one of its highest earners ever in 2017.

"He has so many chains, bro," Paul joked. "That's a depreciating asset. Get yourself something that will hold value; buy some real estate. Maybe buy an Original [Paul's new NFT collection], we'd love to have you. Invest in Prime [Paul's joint energy drink venture with KSI]. Do something smart with your money, Floyd.

Do you think that Logan Paul and Floyd Mayweather should fight again? Let us know your thoughts in the comments section below!

Paul was also offended that Mayweather claimed to reporters last week that it was he, and not the boxer, who asked for a rematch. "He went on a press conference or something the other day and he had the audacity to tell the media that I asked for a rematch," Paul added.

"Let me just set the record straight, why the f*** would I ask for a rematch with someone who doesn't pay you for the fight? If I haven't been paid for the first one, why on God's green Earth would I ask for another one knowing full well I'm probably also not going to get paid the money that I was owed for my work? You dumba**.

"Second off, they asked us for a rematch! He was supposed to fight on top of the Burj Al-Arab; the seven-star hotel with a helipad up top. Would have been amazing.

"I get called a month-and-a-half before because some s*** happened with his opponent and they go 'would you want to fight Floyd in a month-and-a-half?' This is someone on his team, or someone who at least thinks they could get the deal done enough to make a confidential phone call. I go 'bro, what? Pay me for the first f***ing fight,' and hung up."