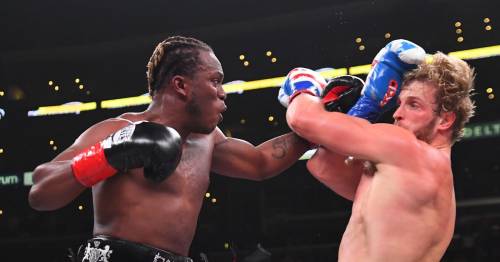 YouTube star Logan Paul has thanked his old rival KSI for "saving his career" during their bitter boxing feud.

The social media duo began talks for a fight at the start of 2018 after KSI, real name JJ Olatunji, called out Paul following his win over Joe Weller that February. Their rivalry immediately got aggressive, with the pair sharing videos and social media posts mocking one another for the best part of two years.

After the feud was left unsettled following a draw in their August 2018 showdown, both men decided to turn professional under Eddie Hearn's Matchroom Boxing banner to make the rematch more exciting. Paul dropped Olatunji during the fight, but was deducted two points and ultimately lost a split decision despite being a betting favourite.

And he has thanked his former rival during a recent appearance on comedian Andrew Schulz's Flagrant podcast. He was asked by one of the hosts why he reconciled with the Brit for their new beverage company, Prime, and admitted that his career was going downhill after a series of scandals before he was brought back into the mainstream for their fights.

"I want to be able to say one day that KSI saved my career, but I made him a billionaire," Paul said of his ambitions for their joint business venture. The drink has sold over 10million units in America, and launches in the UK over the coming days.

"The beef was f***ed," Paul added. "The beef was real, we hated each other, that's why Prime has an innate sense of relatability and hope that you can make friends and connect.

"KSI and I f***ing hated each other, the beef was real, then he beat me in the rematch by a point where I had a weird two-point deduction. He won and it didn't affect me because I knew what it was like to lose.

"And I just don't feel like I lose, there was a line in a diss track I made where I said 'yeah, I took an L but I never really lose'. I can take an L but there's learning in that and I learned that KSI and I were like, f*** the beef, we're the same person just across the pond. In a weird way, we're really alike."

KSI and Logan Paul were once rivals, but are now friends
(

Do you like seeing KSI and Logan Paul as friends? Let us know your thoughts in the comments section below!

The pair joined up in early 2021 for a series of projects including the Brit's album promotional stream, 'The KSI Show'. They also recorded an episode of Paul's podcast Impaulsive, which was their most downloaded episode of al time.

"I did a show for him to promote his album drop," Paul explained. "An hour long special, and he told me on site that he was surprised I said yes to it. I was like 'what do you mean, bro? I don't take any of that s*** personal'.

"Since the last time we had fought I went through so much personal growth that I didn't care about any qualms we had. We had a good go, and we had him on the podcast, our highest viewed podcast.

"And I realised I'm a lot more alike with this kid than I am different. I brought him Prime because I thought it'd be an incredible business move with an incredible story. He's an incredible partner."