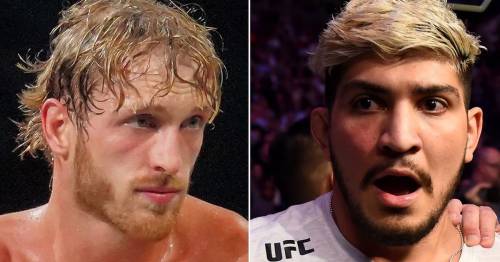 Logan Paul is hopeful that beating Dillon Danis in his next boxing outing could set up a super-fight with UFC legend Conor McGregor.

Danis and McGregor have been close friends and training partners for years, but have drifted of late as the American struggles to maintain his activity in the fight world. Injuries have cost him three years of his MMA career, where he is 2-0 under the Bellator banner, while outside of the cage his trolling has made him an unpopular figure.

But Paul is still willing to face Danis in the ring if he can get himself fit after long-standing feuds with both he and his younger brother, Jake. At one point, a mega-money deal was on the table with Triller for Danis to face the younger sibling, but the jiu-jitsu black belt pulled out of negotiations and Paul instead faced Ben Askren.

"There's levels to this s***," Paul told True Geordie after dismissing a host of YouTube boxers as his next opponent. "Number one, you have to be able to sell a fight. Then, number two, I don't think that those fights would be on par [with Danis].

"I don't believe that people would think 'that could be a good fight'. This could also set me up for a potential Conor fight, should that ever happen. Jake's also trying to fight Conor, either myself or Jake will fight Conor McGregor eventually.

"With Conor, you're not taking a crazy f***ing risk, maybe you are. Because if Conor McGregor loses to Jake or I, that's tough, that's a legacy destroyer."

It appears that the younger Paul is set to face Tommy Fury at Madison Square Garden in August, while Logan has set his sights on Danis. He injured his hand last year, but insists that it's all better now and claims that he will have more power, guaranteeing a knockout in his next fight.

"I'm going to piece up Dillon Danis," Paul said. "Everyone would love that, that dude is the gum that sticks to the bottom of your shoe when you walk down the street, that dude sucks.

"I'm going to shut his a** up, he'll talk about getting in the ring with me, he'll do his talking online that will get a little attention. But the moment you sign that contract, the moment that you're in the ring across from me the story's going to change a little bit.

Would you like to see Logan Paul fight Dillon Danis? Let us know your thoughts in the comments section below!

"It's much scarier than he thinks, he's going to get hit with a shot where he wakes up and realises 'oh f***, I've made a grave error'."

"Bro, I won't be in there for more than four rounds," Paul later added of his next fight. "I'm going to feel him out a little bit and then it won't be more than a few rounds.

"We'll attempt to make this fight, I will give him an offer and he will probably be like 'this is not what I'm worth, blah blah blah'. Yeah it is bucko, you're not even worth that because I will find someone.

"I will find a person who will sign on the dotted line, I will make that someone extremely f***ing rich and famous for the rest of their life. Sure, it will be incredibly embarrassing, you'll get Tyron Woodley'd and you're going to be a meme."

Previous : Logan Paul claims Floyd Mayweather owes him as much as £4million for exhibition fight
Next : Meghan Markle’s kind phone call to family of teacher killed in Texas shooting