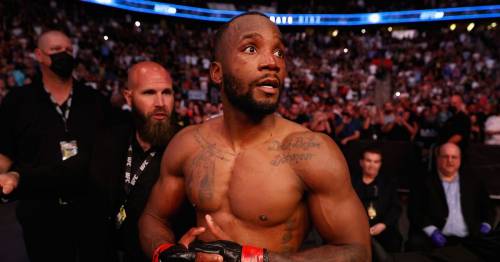 Leon Edwards will allow Jorge Masvidal yet another UFC welterweight title opportunity if the Brit is able to dethrone the seemingly unbeatable champion Kamaru Usman.

Edwards will get a chance at redemption for his loss to Usman back in 2015 when the pair meet at UFC 278 in Salt Lake City, Utah with the belt on the line. The Brit has lost three times in his career, most recently against the Nigerian before heading on a ten-fight unbeaten run.

But with one of his defeats being an early-career disqualification and the other a razor-close split decision, the only one that has likely stuck with him has been his bout with Usman. And should he get through his challenge in August, he has said that he would be willing to finally settle his years-long feud with Masvidal and put his belt on the line to do it.

Masvidal and Edwards were scheduled to square off in December, but the American pulled out with an injury. And Edwards believes that skipping the fight was a sign of cowardice from his rival, who sparked a feud between the pair when he attacked him backstage at a UFC event in London back in March of 2019.

“I thought, you little p****,” Edwards said of Masvidal's pulling out during a recent appearance on The MMA Hour. “I had a feeling he’d have done it. I don’t think he wants to fight, and I’ve always said that he doesn’t want to fight me. Honestly, I would’ve loved for that fight to happen.”

“When I win the belt, I’ll give him the title shot, that’d be a fantastic fight in the UK. Bring it back to the O2 where it happened, for the title. That’s the one to do next, that’s the best.

“I'll offer it to him, if that happens in the UK, sure. My dream scenario would be to bring it back to London and to headline London. So I want to come back home and then do it."

Would you like to see a sanctioned fight between Leon Edwards and Jorge Masvidal? Let us know your thoughts in the comments section below!


Edwards also blasted Masvidal as a "rat" after he was alleged to have attacked fellow fighter Colby Covington just weeks after being comprehensively beaten by him in their sanctioned fight at UFC 272. “That boy’s a little rat,” Edwards added.

“Colby shouldn’t have snitched, but Masvidal, he’s like a little rat. He’s like a sneaky, run up behind you, throw a shot, and ducks off. He’s a weirdo. A weird, weird man.”

And Edwards understands that he will likely have to face Usman twice, given the champion's dominance over the past three years since winning the belt. The Nigerian has cleared out the top of the welterweight division, and hasn't lost under the UFC banner.