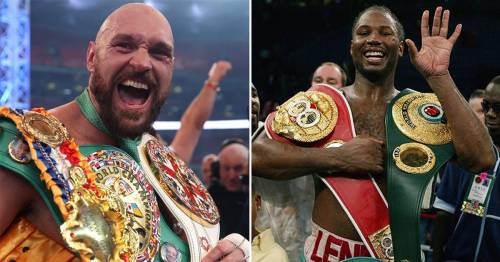 Lennox Lewis has challenged Tyson Fury to clean out his division and beat the next generation of heavyweights before he can call himself the greatest of all time.

The winner of a mythical fight between Lewis and Fury has been long proposed given both men's dominance in the heavyweight division. Lewis, the last undisputed champion of the division, retired with 41 wins and 2 losses whilst Fury is an undefeated two-time champion with 32 wins under his belt.

When Lewis was asked about a fight with Fury by Piers Morgan on Talk TV, he jokingly said: "I refuse to answer easy questions." Lewis then praised Fury for his skills, stating: "Listen, Tyson Fury's a great champion. He moves well and is elusive, has a great jab and great uppercut now. All he has to do is clean up the division like I did, then beat the next generation.

When being accused of avoiding the question about a fight between the pair, Morgan pushed for a decisive answer from Lewis but he replied: "You can't put two Kronk fighters against each other, that's naughty."

Fury's decision to retire after his knockout win over Dillian Whyte last month has been widely criticised by boxing fans. 'The Gypsy King' is likely next in line for an undisputed shot against the winner of Olkesnadr Usyk's rematch with Anthony Joshua in July.

Despite Fury seemingly retiring without ever achieving undisputed status, his promoter Frank Warren thinks he will go down as a better heavyweight than Lewis because of the opposition he's faced.

“I think it’s out of him and Lennox Lewis as to who is the greatest British heavyweight ever and I think Tyson’s the better heavyweight,” the Queensberry Promotions boss told Mirror Fighting . “He’s the better boxer and he’s beaten guys when they were in their prime. Deontay Wilder was not over the hill, he was in his prime, and Tyson has no fear of travelling.

Who is the better heavyweight – Tyson Fury or Lennox Lewis? Let us know in the comments section below

“In any era, he would hold his own, against any of those guys – the Foremans, the Fraziers, the Alis. In any era he would be there and he would give them all tough fights.He’s a big man, he’s got a great chin, he can box, he’s got a great boxing brain, he’s a switch-hitter, great footwork, great hand speed, he’s a natural athlete. He would be a handful for anyone.”

Fury and Lewis have previously traded words in the past, but are now on good terms with each other. Fury payed homage to the former undisputed king after his knockout of Whyte, stating Lewis would be "proud" of the fight-winning uppercut he landed.

Previous : Martyn Ford was told Iranian Hulk was “six-foot-four monster” before face-off
Next : Most Great Barrier Reef coral studied this year was bleached