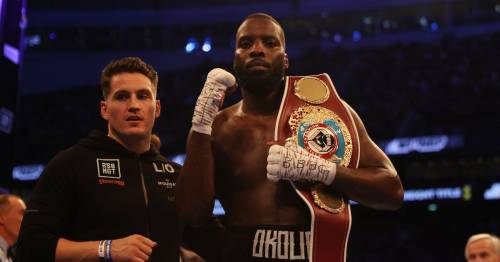 Lawrence Okolie “laser-focused” on unifying at cruiserweight before heavyweight move

Lawrence Okolie has insisted that he isn't viewing top heavyweights as prospective opponents as he is "laser-focused" on unifying the cruiserweight division.

Emulating the successes of great cruiserweight champions who made the move up like David Haye, Evander Holyfield and Oleksandr Usyk is something he is looking to do eventually, but not until he has claimed all the belts at 200lbs.

Okolie currently holds the WBO's cruiserweight belt, but would need to win a minimum of three fights to achieve his goal.

Mairis Briedis, who fights this weekend, holds the IBF title, as well as The Ring Magazine belt, while Ilunga Makabu is the WBC champion.

The WBA is looking to cut down on "regular" and "super" champions, but currently has two title holders in Ryah Merhy and Arsen Goulamirian.

"As we're speaking, I'm watching Makabu fight right now in the background, the cruiserweight division is all I'm focused on until a time comes where I'm no longer in it any more."

But Okolie admits that he will look to move up once he has followed in the footsteps of Usyk, who is the only man to be undisputed at the weight in the four-belt era.

"Of course, once I've unified there won't be much left for me in the division," Okolie continued.

"I'll have to go up to heavyweight and see what it's like for the big boys."

But prior to that, he systematically went through the cruiserweight division to unify the belts, and even won the World Boxing Super Series in the process.

And Okolie is planning on forging a similar path at the weight, and says that he is looking to fight another champion next.

"We're already in talks with Eddie [Hearn, his promoter] about unification bouts in the early part of next year," he said.

Will Lawrence Okolie be the next fighter to unify the cruiserweight division? Let us know your thoughts in the comments section!

"They've all got pros and cons, politics here and politics there so we're just trying to figure out which one that could be done."

Briedis' two belts are an exciting prospect for Okolie, who also feels that he matches up well stylistically with the Latvian.

"He lets his hands go the best of any of the champions," Okolie explained.

"I've never seen him smother so we'll both be punching and mid-to-long range and it'll be a good looking fight.

"He's someone who I will not get in close with at all, my whole game plan would be on the outside and vicious at mid-range.

"It's a really good looking fight… he just has to win his fight on Saturday and then we can start talking."

World Champion Boxer Lawrence Okolie has teamed up with McDonald’s to launch a new campaign designed to improve the life chances of thousands of young people.

To find out more, visit mcdonalds.co.uk/planforchange