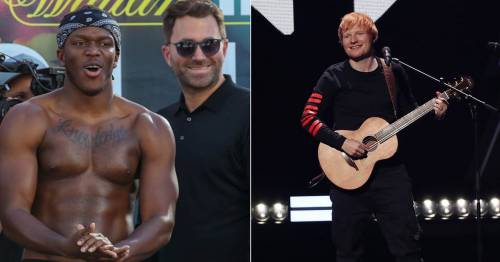 The YouTubers-turned-boxers famously made their boxing debuts on a card promoted by Hearn and Matchroom Boxing, but the Brit seemed to have forgotten his old promoter's name.

KSI, whose real name is JJ Olatunji, and Paul were speaking on the American's show Impaulsive to promote their new joint business venture Prime Energy when discussions turned back to their boxing past.

Despite both men claiming last week that they were retired from the sport after their two bouts against one another, which KSI won, it appears that the Brit still has eyes on a bout with his new partner's younger brother Jake Paul.

And when the elder Paul brother said that he would like to host the press conference in the role that Hearn took on for their fight, KSI accidentally called the boxing promoter Ed Sheeran.

Hearn promoted the second fight between KSI and Logan Paul
(

"I'll probably go like hands off and say 'best of luck to both sides'," Paul said of a possible fight between the pair. "My business partner vs my brother?

"But you know I love Jake, so I will strictly be watching, if you guys ever fight, to be entertained as s***, I will be having so much fun playing the middle man.

"I want to do the press conference, like asking the questions type of s***."

But when KSI went to say that he would be like Hearn, he accidentally said "like Ed Sheeran," causing Paul and his co-hosts Mike Majlak and George Janko to laugh hysterically.

He seemed to have forgotten Hearn's name entirely when Paul helped him out to remind him of the promoter, who paid them both millions for their 2019 bout.

The pair first fought in the biggest white collar boxing match of all time at the Manchester Arena in August of 2018.

Are you happy to see KSI and Logan Paul patch up their differences and become partners? Let us know your thoughts in the comments section below!

But when the bout ended in a draw, and sold a whopping 1.2million pay-per-views around the world via YouTube streaming, Hearn decided to jump on board and sign them up for a professional rematch.

The second fight took place at the Crypto.com Arena in Los Angeles (then called the Staples Centre), with Olatunji coming out on top by way of a split decision over the six rounds.

Paul was deducted two points after knocking Olatunji down in the fourth round, and subsequently appealed the decision, although the Brit's win was upheld.

And despite the bitter rivalry between the younger Paul brother and KSI continuing to this day, Logan has patched up his differences with his old rival, and they are now close friends.

They reunited last year to work on a number of YouTube projects, and then joined forces this year to launch their energy drink, which is coming to the UK later this year after a massive US launch.