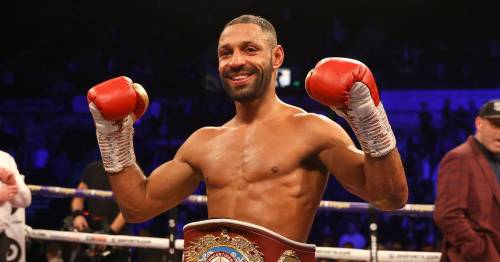 Kell Brook has announced his retirement from boxing, insisting his "heart is no longer in it".

The 36-year-old from Sheffield has called time on his professional boxing with an impressive 28-3 record. His decision comes just three months after he stopped British rival Amir Khan in the sixth-round of their grudge match in Manchester.

"I've had a long chat with my family and my parents, and it's over for me. I'll never box again," Brook told The Telegraph. "It's a little emotional to be actually saying this out loud. My mam [Julie] is relieved. I think everyone around me is pleased.

"Truth is, boxing is a very very tough, dangerous sport, one in which you can be legally killed in the ring, and I've finished now with all my faculties intact."

Brook started fighting professionally in September 2004, beating Peter Buckley on points in his first fight. He is a product of Brendan Ingle's famous Wincobank gym in Sheffield, which has produced several world champions – including Naseem Hamed and Jonny Nelson.

On the chances of a comeback, Brook added: "I just don't see it. It's not there any more… if I hadn't boxed, I would have ended up in real trouble, my life might have gone off the rails, given where I was from. I'll always be grateful to Brendan Ingle and his sons Dominic and John for helping me to find the discipline and the structure in my life."

Is Kell Brook one of the greatest fighters in British boxing history? Let us know in the comments below!

Brook achieved his dream of becoming world champion in 2014, defeating American Shawn Porter in California to win the IBF welterweight title. He successful defended the title three times, boasting a 36-0 record in March 2016.

The Sheffield fighter suffered the first loss of his career in September 2016, when he stepped up to Middleweight to challenge Gennady Golovkin for the WBC, IBF and IBO world titles. He was stopped in the fifth round. Brook went on to fight modern-day greats Errol Spence and Terence Crawford in world title fights but lost both.

He concluded: "It was my dream since I started boxing at the age of nine to be a world champion. It was a special night. I've been in the ring with Golovkin, Spence, Crawford, and I finally got my fight with Amir Khan. After that, I don't think I needed to go on anymore."