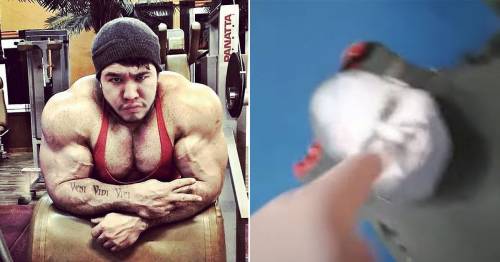 Kazakh Titan – real name Almat Bakhytovich – has called for a fight with Iranian Hulk by punching and throwing around a punchbag with his face stuck to it.

Little is known about Bakhytovich, who is an influencer from Kazakhstan. He claims to be a "master" of MMA and combat sambo and has been calling out Hulk – real name Sajad Gharibi – for years. In his latest challenge to the Iranian, he threw around a doll with his face on it.

"Sajad, I am waiting for a contract. I am master at MMA and master at combat sambo. Let's fight Sajad, let's fight. Not you Hulk, you Sajad. Let's fight," he said in the video addressed to Gharibi. Bakhytovich is known for his muscly physique and feats of strength, of which he claims to bench press 150kg and deadlift 300kg.

The Kazakh has previously uploaded a video of himself bursting a 'hot water bottle' with Gharibi's face by blowing it up. He also tried to set a national record by moving a 26-ton aircraft at Nur-Sultan airport, but failed in his attempt.

His other questionable strength accomplishments include breaking out of a pair of metal cuffs with brute force and bursting open a can of coke with his bare hands. Bakhytovich also claims to be a two-time strongman champion.

Bakhytovich is nowhere near as popular as Gharibi, boasting only 22,000 followers compared to the Iranian's one million. His efforts to fight Gharibi come after the Iranian's fight with fellow strongman Martyn Ford was cancelled last month.

Ford claimed the fight was cancelled over "mental health concerns" after several posts Gharibi made in the build-up to the clash. Gharibi has refuted these claims and threatened to sue Ford whilst demanding a new opponent for a Boxstar event.

What did you make of the Kazakh Titan's call out? Let us know in the comments section below

During a press conference for the now-cancelled fight, Gharibi claimed he had been training intensly and had lost 30lbs. He later burst into tears during interview on Iranian TV after claiming he had been disowned by his parents because of his actions in before the fight.

Gharibi is yet to address any of Bakhytovich's challenges whilst Ford has moved on from a fight with the Iranian, instead challenging World's Strongest Man and Game of Thrones star Thor Bjornsson to a fight. Bjornsson already has several boxing fights under his belt and beat fellow strongman Eddie Hall in March.