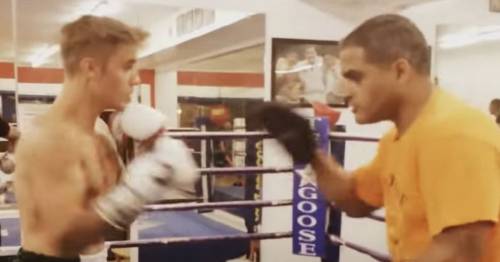 Pop star Justin Bieber has been backed to follow Jake Paul into the professional boxing ranks.

Paul made his debut in 2020 against fellow YouTuber AnEsonGib and has amassed a record of 5-0 having beaten the likes of former UFC stars Ben Askren and Tyron Woodley.

Bieber, meanwhile, has been training behind the scenes for a film about Ukrainian fighter-cum-promoter Dmitry Salita – and has been praised by screenwriter Gregory Allen Howard. "From what I've seen of Justin Bieber, he has the talent and the boxing skill to crossover from an entertainment background into boxing – he has the ability to become the next Jake Paul," Howard told Vegas Insider.

Justin Bieber on the pads
(

"I saw Justin spar and he's got skills. I'm not telling you he's ready to be the middleweight champion of the world but he’s not bad. The hard thing in a boxing movie is to move like a boxer. Justin Bieber apparently was taking some lessons, he was really quite credible. There's a little clip of him on YouTube or something. He's very credible as a boxer."

Bieber previously called out film star Tom Cruise to a fight in the UFC octagon when he tweeted: "I want to challenge Tom Cruise to fight in the octagon. Tom if you don't take this fight your scared and you will never live it down. Who is willing to put on the fight? Dana White?"

UFC president White then hinted he would be open to staging a fight with Cruise, without naming Bieber as a potential opponent. “I'm going to tell you something interesting, obviously, this thing came out – lots of people will talk about fighting somebody in the UFC, things like that," White told TMZ Sports back in 2019.

Should Justin Bieber fight in a boxing bout? Let us know in the comments section below

“Whether it’s NFL players, or celebrities or whatever, it happens a lot. So obviously I saw it like everybody else did and I didn’t pay much attention to it. It picked up a lot of steam and was everywhere.

“I’m not going to say any names but I’m just gonna tell you that I got a phone call from a couple of real guys that said that they really do want to do this fight and they believe that Tom Cruise would do the fight. And I told them, ‘Well, I’ll tell you this, if that’s true, if that’s true and everybody involved in this thing really wants to do it, we can talk'.

“Let me tell you what, I’d be an idiot not to make this fight. That would be the easiest fight to ever promote in the history of my career.”

Previous : Woman given devastating news after feeling like she had been struck by lightning
Next : Martyn Ford jokes he’s “never looked so skinny” despite weighing over 300lb