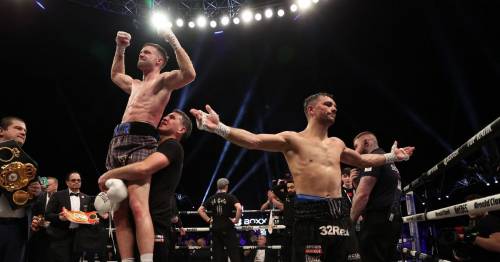 Josh Taylor will remain at 140lb and is willing to rematch Jack Catterall to "shut up" his critics.

Taylor retained his undisputed titles with controversial victory over Catterall in February where it was widely viewed that the challenger should have had his hand raised at the final bell. Taylor originally planned to move up to welterweight to challenge the likes of Errol Spence and Terence Crawford which was met with widespread criticism.

The 'Tartan Tornado' has since made a U-turn on his decision to switch weight and wants to prove he remains one of the best fighters in the world. Taylor told The National : “I want to shut everyone up. The only reason I’m staying at the weight is: I want to fight Catterall again.

“I don’t think it was the wrong decision [in February], but I want to shut everyone up. I want to prove that was an off night for me and that I’m one of the best fighters on the planet. Because of all the stick and abuse I’ve been getting, and the way Jack’s been too – mouthing off and moaning – I just want to shut his mouth. The single reason I’m staying at the weight is to shut him and everyone else up.”

The undisputed champion's split decision victory was subject to high-profile scrutiny after the fight, with the British Boxing Board of Control launching an investigation into the judges' scorecards. Local MP Sir Lindsay Hoyle of Chorley even referred the case to the police for further inquiry with Catterall visibly devastated by the turn of events.

Taylor was expected to move up to challenge Crawford before vacating his undisputed titles with Catterall expected to get a second chance to fight for the fragmented titles. However he has since declared he will defend his titles against WBC mandatory challenger Jose Zepeda before he can reignite his rivalry with Catterall.

Who do you think would win the rematch – Josh Taylor or Jack Catterall? Let us know in the comments section below

Catterall was understandably left to regroup after his defeat but believes that a rematch against him is the only route available for Taylor next. 'Although he got the decision, he knows he's got to put things right and try and beat me," Catterall told The Daily Mail. "This is a blemish on his record. A rematch is going to be his only saving grace going forward. He knows he has to fight me again.

"He's living in denial. Everybody – apart from Josh and maybe one or two diehard fans – have said he lost the fight. I think he thought it might have settled down by now. I think he knows he's lost a lot of respect in the boxing world. That will be living with him every day and eating him up. It was an injustice. I think he's come to the realisation now that he has to fight me again and try to put it right."