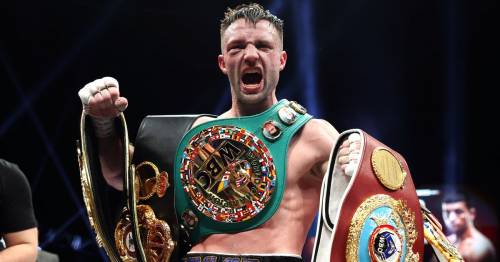 Josh Taylor has given up his WBA super-lightweight title after turning down a fight with mandatory challenger Alberto Puello.

Taylor has been forced to vacate the belt after for failing to comply with an ordered title defence against Puello, who is unbeaten in 20 fights. Taylor had 20 days to agree to the fight to avoid being stripped after a purse bid was won on April 22.

"The World Boxing Association (WBA) Championships Committee, in accordance with the organisation's rules, has decided that the super-lightweight title, which was held by the Josh Taylor, is vacant," a tweet from the WBA read. Taylor won the 140lb WBA belt by outpointing Regais Progais in 2019. He defended it against Apinun Khongsong, Jose Ramirez and most recently Jack Catterall in a controversial fight.

Who do you want Josh Taylor to fight next? Let us know your thoughts in the comments section below

Taylor's mandatory clash with Puello was ordered by the WBA in March along with a 30-day negotiation period. No deal was agreed after the deadline – as reported by Boxing Scene – which resulted in a purse bid that was won for £160,000 by TGB Promotions.

Puello's status as interim champion guaranteed him £73,000 whilst Taylor would have received £90,000. The Dominican agreed to terms for the fight but had to wait for Taylor, who never signed a contract.

Josh Taylor is no longer an undisputed super lightweight champion

Taylor has now lost his undisputed status at 140lbs, but still holds the IBF, WBO and WBC belts. The Scotsman has another mandatory challenger to deal with in Jose Zepeda for his WBC belt. The fight, which was ordered last month, will likely head to purse bid on May 24.

Puello won his now-defunct interim title almost three years ago. He defended the belt twice in his native country, but it wasn't on the line for his most recent win against Ve Shawn Owens. The 27-year-old's promoter, Belgica Pena, told Boxing Scene about a fight with Taylor: “We wanted the Taylor fight, but the important thing is that our fighter receives what he deserves.”