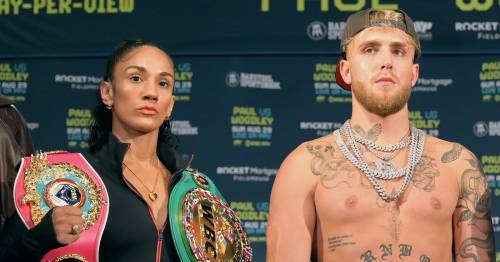 Promoter Eddie Hearn believes the biggest fight in women's boxing history could come about as the result of an "ego trip" from Jake Paul.

YouTube star Paul has gone from social media influencer to fighter to promoter during his brief fighting career, and has recently signed legendary champion Amanda Serrano to his Most Valuable Promotions umbrella.

And he could be the man who finally pushes through a bout between Serrano and fellow multiple-weight world champion Katie Taylor in the early part of next year.

Paul will have to work as co-promoter with Matchroom Boxing boss Hearn, who promoted his professional debut in January of last year.

The bout was within touching distance of happening before the onset of the coronavirus pandemic, but was cancelled when a lack of crowds meant it couldn't be funded.

But it will finally take place in Madison Square Garden early next year, assuming both women win their upcoming bouts in December.

Jake Paul has signed Amanda Serrano to his promotional company
(

"We've been speaking with Most Valuable Promotions and we want to do it here in New York," Hearn told Mirror Fighting at a press conference for Teofimo Lopez's first lightweight title defence against George Kambosos Jr.

"Katie and Serrano fight in December, so I'm looking for the end of April for that fight, or something like that."

And Hearn says that Paul's involvement in the historic match-up, expected to take place in front of 20,000+ spectators in New York, could be part of an "ego trip" where he could brag about facilitating an iconic match-up.

Paul works alongside his manager Nakisa Bidarian in running Most Valuable Promotions, with the former UFC executive controlling the majority of the company's negotiations.

"Jake is still the mind behind the operation," Hearn continued. "I think Jake has taken a liking of respect to Amanda Serrano, he's given her a great platform and pushed her profile considerably.

"And he wants to be the guy that makes the biggest fight of all time in women's boxing.

"It's partly because he likes Amanda, and partly as an ego trip where he can turn around and get a huge payday for Amanda, give her the biggest fight of all time and say 'I did that'."

Are you excited for Katie Taylor vs Amanda Serrano? Let us know your thoughts in the comments section below!

Serrano has insisted that she is focused on her upcoming bout with Miriam Gutierrez, which takes place as the co-main event of Paul's bout with Tommy Fury next month.

Taylor will face Firuza Sharipova in Liverpool a week before that bout, with both women hoping that wins in their respective contests will finally see the fight become a reality.

"Katie, please perform your best on December 11," Serrano pleaded during a chat with Mirror Fighting.

"I'm going to do that December 18 and let's make this fight happen.

"We've both just got to go out there and put on a hell of a performance and make sure people will continue to talk about us and let's put on a great show for women's boxing."