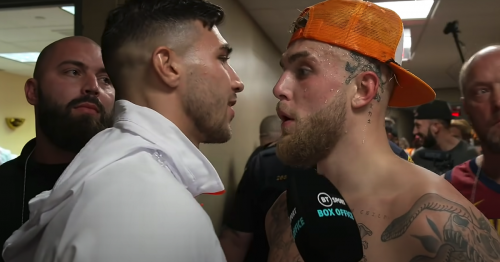 Jake Paul and Tommy Fury 's boxing announcement looks to be imminent as the YouTube star's coach says they are almost in agreement on a deal.

Danny Smith has been working with the influencer-turned-boxer in his Puerto Rican training base and claims that their side of the deal is done. But there are still minor kinks to iron out on Fury's end before the fight can be officially announced after a series of leaks around the event.

Paul has confirmed that he is fighting at Madison Square Garden, New York City on August 6 no matter what, with the legendary Amanda Serrano competing on the same night. Most Valuable Promotions insists that they are both headlining a major Showtime pay-per-view event, with opponents to be confirmed.

“I'd probably say that we're around 90 per cent done but we're just waiting on their end," Smith told Vegas Insider. "We're good on our end. Whatever particulars that need to be worked out there end that's what we're waiting on.

"I think without question [Tommy Fury is the right fight for Jake]. I like it because Tommy is a very fast foot guy, very fast hands and he moves around and understands distance and range, he boxes fairly well.

"It's going to be really, really good. He's not a huge puncher, but decent, with the right hand he is pretty decent. I think that it's a really, really good step up for both guys to be honest with. The reason I'm picking Jake to beat Tommy is because Jake has more of a dog mentality, the bigger puncher, and he's willing to trade."

The younger Paul has taken an extended break from the ring after fighting four times in 13 months from November 2020 to December 2021. He brutally knocked out basketball star Nate Robinson and MMA world champions Ben Askren and Tyron Woodley – after a split-decision win over the latter – in major pay-per-view events, before taking time off to focus on promoting Serrano.

And after the massive success of Serrano's undisputed title fight with Katie Taylor, which she lost by a narrow decision, the duo are heading back to Madison Square Garden. This time, however, Paul is joining her in the ring for his first fight at what is often called the 'Mecca of boxing'.

Who do you think wins; Tommy Fury or Jake Paul? Let us know your thoughts in the comments section below!

"The media and a lot of fighters don't know how well he's progressing and they really don't know how serious he is," Smith continued. "And they're going to be underestimating him when they get in there until they feel his presence, his strength, his power, his speed.

"We've noticed that with a lot of sparring partners because they get in there and they're like: 'wow, it's a life or death situation in there with him and he's better than we thought' the world is going to see that.

Previous : Chris Eubank Jr had to “go outside and settle score” with Neymar after poker game
Next : Putin ally shares footage of carnage as Ukrainian soldiers are ‘destroyed on the spot’ – World News