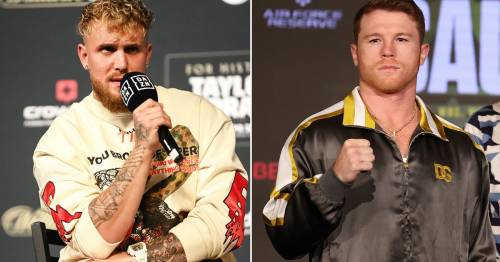 Claressa Shields has told Jake Paul to forget about facing Canelo Alvarez after the YouTube star claimed he would beat the champion within the next three years.

Alvarez recently suffered the second defeat of his professional career after being outpointed by Dmitry Bivol in Las Vegas. Paul responded to the loss by claiming he is ready to share the ring with the Mexican, backing himself to win if the fight is held within the next three years.

But multiple world champion Shields believes Paul will never beat Alvarez, tweeting: And Jake Paul will not beat Canelo! Not now, not in 3 years! Not ever! Bye!" The 'GWOAT' also leapt to the conquered Alvarez's defence, adding: "I find it disgusting how everyone is slandering Canelo and using his loss to say mean things, question his boxing legacy, skills and even make fun of him.

"It’s f****** weird because the dude dared to be great! There is no shame in trying! Shame is never taking risk!" Shields has previously held a feud with Paul over his presence in boxing after he criticised her for suffering defeat in her MMA pursuit.

Shields later claimed she could beat Paul in a sparring session and named him on her boxing bucket-list but the pair have since offered to squash their feud after she praised his involvement in the fight between Katie Taylor and Amanda Serrano. Paul has won his maiden five professional fights and is set to return to the ring on August 13.

Paul called out Alvarez throughout the early stages of his career and is targeting a shot at the Mexican in a bid to become world champion in the sport. The 25-year-old had previously suggested he would look to fight the undisputed 168lb champion in the final outing of his career before retiring.

Would you like to see Canelo Alvarez v Jake Paul? Let us know in the comments section below

The YouTube star quickly took to social media to mock Alvarez for his defeat, tweeting: "And just like that Canelo Alvarez loses to Dmitry Bivol," he said in a video posted on social media. "An amazing fight by Bivol. I'm two inches bigger than Bivol and 40lb heavier. Give me three years and I take out Canelo in the same way. He was up on the ropes like he won but he only won three rounds in the entire fight.

"Eddie Hearn, f*** you, you can suck my d***. I'm coming and I'm beating Canelo in three f***ing years, I put that on my mama. Congrats to Dmitry Bivol, he showed Canelo is easily beatable by a bigger man which is what I've known for a long time. Believe in yourself and don't listen to those British s***bags like Eddie Hearn."

Alvarez refused to rule out a meeting with Paul in the build-up to his latest outing, and even praised his influence in boxing and for bringing "new eyes" to the sport.