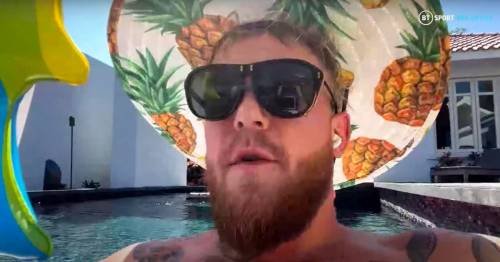 Jake Paul has suggested Tommy Fury should gift his purse to brother Tyson because he is doing more to promote the rivals' fight.

The YouTube star will make his fifth professional outing against Fury on December 18 in Florida.

Fury is being trained by his heavyweight champion brother Tyson which has generated more interest in the grudge match.

The 22-year-old will earn a multi-million-pound purse for his eighth professional fight – but Paul doesn't believe he deserves to keep it.

“I think Tyson should be paid Tommy’s purse because he’s promoting the fight more than Tommy is," Paul said at the press conference.

"It’s nice to have somebody on the other side of the promotion who actually has a following because I’ve been promoting all of these fights by myself. Finally Tyson Fury steps up to the plate and does some promoting.

Jake Paul was relaxed during his press conference with Tommy Fury
(

"I’m sick and tired of carrying promotions by myself so thank you Tyson, I tip my hat to you. But I’m going to steal all of your fans. I’m going to knock out your brother and be on my merry way.

"Another payday. Another speed bump on the way to becoming a world champion and the biggest prizefighter in the world."

Paul has entered his training camp for the fight and will look to add a fifth professional victory to his record after defeating the likes of former UFC stars Ben Askren and Tyron Woodley.

And his opponent has also began training with his brother Tyson who will take over the duties from Sugar Hill Steward who was set to step in.

The 24-year-old YouTuber has made a dig at Fury for not being a "champion" and is confident that his training camp will have him in the best shape of his career.

Do you think Jake Paul can beat Tommy Fury? Let us know in the comments section below.

“Training camp is good. I’m pretty much on vacation," Paul continued. "We started this training camp two months before these professional fighters started theirs.

“They are underestimating me to the highest degree. They can try to teach this kid up as much as they want in a short amount of time but that’s not the way boxing works. Tommy is green. Tyson is trying to train him like a champion but the kid is not a champion.

“These people think they can come in and beat me because they have amateur careers or they’re professional this or they’re UFC that.

"They don’t understand what they’re getting in there with. It’s funny to see each and every one of them fail in front of the world and the same exact thing is going to happen to Tommy."