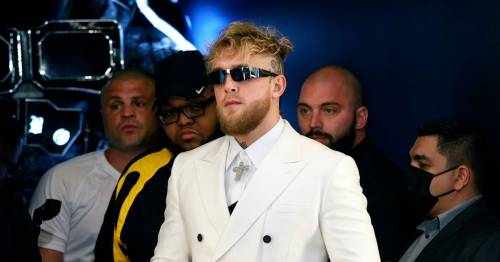 Jake Paul has mocked rival Nate Diaz by making a taunt about his professional record ahead of a potential clash in the ring next year.

YouTube star Paul will make his ring return on December 18 in a huge grudge match against British star Tommy Fury.

He is making arguably the biggest step of his career by fighting a natural boxer after previously bringing over MMA fighters in crossover bouts.

But he has continued to form a rivalry with MMA star Diaz, and has teased a potential crossover bout once again after a social media row.

Paul wrote on Twitter : "You have six times as many losses as Ben Askren. Let that sink in."

This came after Askren claimed that Paul was good at boxing, after their previous meeting earlier this year which Paul won with a vicious early knockout.

Diaz then replied to Askren's statement: "Coming from a retired wrestler who can’t fight or box."

Diaz later responded to Paul by tweeting: He sucks Jake You’d get smoked n a real fight tho; you can’t really fight. Boxing matches with wrestlers only… let that sink in."

Paul has since fought against another UFC star in former champion Tyron Woodley whom he defeated by split-decision.

The 24-year-old began his rivalry with Diaz by including him and his brother Nick on a boxing hit-list which also included Conor McGregor and Kamaru Usman.

And there have been back and forth exchanges since, with Diaz vowing to end the YouTube star's boxing career emphatically if he switches to the iron square.

Diaz currently has one fight remaining on his current deal with the promotion and is struggling to find an opponent.

It is expected he will secure a move away from the UFC and is planning to create his own promotional company with his brother to fight on when they leave.

Should Nate Diaz quit the UFC and fight Jake Paul? Let us know your verdict in the comments section below

They also currently have active plans to face the Paul brothers and they will be ringside for his next exploit in Florida to watch their friend Anthony Taylor take on Chris Avila.

Paul would likely accept any offer to face Diaz but he is planning to take a year-long break from action after fighting twice in 2021.

And former UFC middleweight Michael Bisping believes that a switch to boxing to face Paul would be the right move for Diaz.

"The UFC are very smart and, generally, someone like Nate Diaz isn't just going to get to fight out of his contract," Bisping said in a video for his YouTube channel.

"This is just the way they operate. A lot of promotions, they all do it. You negotiate before the final fight of the contract so who knows?

"I don't think Dana would ever do a joint promotion with Jake Paul, but I would love to see Nate Diaz vs. Jake Paul. I think that would be a tremendous fight but it's not a case of that."