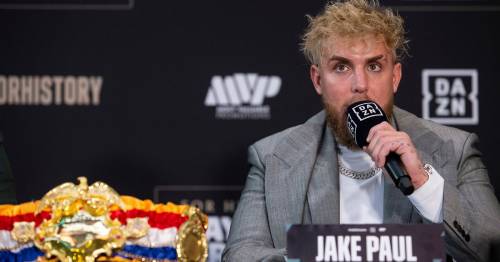 YouTube boxer Jake Paul is aiming to become 175lb world champion within the next three years.

Paul has not fought since defeating former UFC champion Tyron Woodley with a brutal KO last December. Throughout his five-fight professional career, the YouTube star has weighed in at 191lb within the cruiserweight limit and has spoken of his plans to become world champion in the division.

However the 25-year-old has now set himself a new target after watching Joe Smith Jr lose to Artur Beterbiev, tweeting: "Lol you all don’t think I can become world champion but look at how Joe Smith Jr is fighting. In 3 years I will become the light heavyweight champion of the world."

Smith Jr was brutally stopped inside two rounds by the undefeated Beterbiev who became a three-belt unified champion at 175lb. The Russian-Canadian maintained his 100 per cent KO ratio and is considered one of the most feared fighters in the sport. Paul could easily fight at the light-heavyweight limit with potential rival Tommy Fury competing at that weight in the past.

The YouTube star has previously stated his intentions to become a world champion in boxing but wanted to do it in as short a time as possible in order to limit damage to his health. However he later revised his deadline and believes it could take up to fifteen fights to establish himself within the boxing rankings system. "It's so interesting because, at the beginning of the year, I was like, 'Oh, I'll go 10-0 and then retire'," Paul told Chris Mannix after his victory over Woodley.

"But in a blink of an eye, all of a sudden, I'm 5-0. I feel like I just finished my rookie season and I just finished chapter one of the book. And there's so much more left for me to read. And I'm young, I'm motivated, and I'm only getting better and better and better. With each fight I realise how much further I can take this even more and I knew the competition would level up with every fight.

Do you think Jake Paul will ever become world champion? Let us know in the comments section below

""I was driven by the motivation that people were tuning in to watch me lose. So it's weird to try and map it out but I definitely want to go undefeated and then retire. So whether that's 10 fights, 15 fights – we'll see, I guess."

Paul has targeted some of the sport's biggest names since his arrival on the scene including undisputed 168lb champion Canelo Alvarez. The YouTube star believes a fight with Alvarez would be ideal in the final outing of his career to attempt to become champion.

Boxing legend Oscar De La Hoya has backed Paul to become champion in the future. “Let me tell you one thing about Jake Paul," he said. "He’s the real deal. With only four or five fights, and the way he’s taking it serious, Jake Paul is the real deal. He wants to become a world champion and there's no way out of becoming world champion. You have to fight the very best and he's doing it right!"