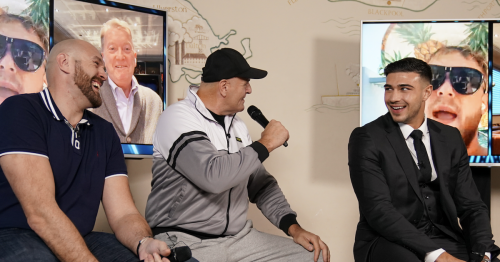 Hearn was one of hundreds of thousands of spectators online as Paul went back-and-forth with the Fury family in an outlandish press conference yesterday.

And the Matchroom Boxing promoter, who handed both Jake and his brother Logan their professional debuts, said that despite the poor internet quality from Paul's Puerto Rico video link, the American was the winner from the press conference.

Speaking with Mirror Fighting ahead of this weekend's unified lightweight title fight between Teofimo Lopez and George Kambosos Jr in New York, Hearn said the event was a "shambles".

"I just caught up with that shambles of a press conference with Fury earlier, I don't know what was going on.

"One was on a Zoom that was crackly and they [the Fury family] are sitting in a restaurant or something, I don't know.

"But for the first time ever, Jake Paul has completely ruined all three Furys.

"Jake's witty, he's smart and he's putting the work in."

Hearn doesn't believe in Paul's ability to make it as a top boxer in the long run, despite what the YouTube star has claimed.

But he has admitted that he doesn't need to be a great fighter to contribute to the sport in a positive way.

"He's not very good, but he doesn't have to be very good," Hearn continued.

"I don't mind what he's doing because at least he's been fighting mixed martial artists but now he fights a guy who does actually box as well.

"He's well within his rights to do what he does, but he's very entertaining."

What did you make of Paul and Fury's UK press conference? Let us know your thoughts in the comments section below!

Paul and Hearn had a brief business relationship when the Brit promoted his first professional fight against fellow influencer AnEsonGib last year.

And the pair will reunite as co-promoters next year when Katie Taylor finally faces Amanda Serrano in arguably the biggest fight in women's boxing history.

But first the YouTube star must focus on his upcoming fight with Love Island star Fury, who is his toughest career test.

The reality TV star has fought professionally seven times, winning all of those bouts against mostly journeymen.

Paul has yet to face anyone with a professional boxing record yet as he has accrued a 4-0 record with three knockouts.

However, his last two opponents; Tyron Woodley and Ben Askren were world champions in MMA, with Woodley known as one of the great UFC welterweight champions.

His only opponent who had competed in boxing was AnEsonGib, real name Ali Al-Fakhri, who had won his two white-collar boxing matches against beginners before facing Paul.

Previous : Teofimo Lopez spent over $250,000 on camp for George Kambosos fight
Next : Queen’s Brian May blasts woke culture and says Freddie Mercury would have struggled