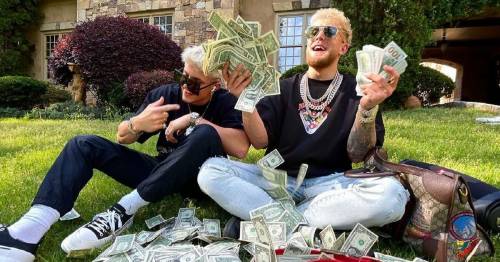 Jake Paul is now "poor" after losing a chunk of his boxing wealth following investments in Cryptocurrency which have crashed.

The YouTube star has launched a successful boxing career having won five times as a professional including in two lucrative victories over Tyron Woodley. Paul was named as one of the highest sporting earners in 2021 having pocketed an incredible £31 million from the sport so far.

Paul's brother Logan has now claimed his brother earned around $40 million last year from his exploits during an episode of his Impaulsive podcast. Co-host George Janko said: “It’s going pretty well, he’s won every fight he’s done,” with other host Mike Majlak adding: “He made like $40m last year.”

Before Logan quickly responded: “Yeah he made $40 million last year. It doesn’t matter, he put it all in crypto, he’s poor now.” Paul has an estimated net worth of around $60 million according to Celebrity Net Worth having moved on from making YouTube videos on to the boxing scene as a fighter and promoter.

Cryptocurrency is a form of currency that exists digitially and virtually and is popular among celebrities including YouTuber boxer KSI who also invested heavily in the markets. In recent months the crypto market has taken a huge hit with currency Bitcoin having declined to almost $20,000 in recent weeks.

This made it it's lowest value since December 2020 and has seen several high-profile figures losing significant chunks of their investments. Paul previously claimed that his estimated $40 million boxing wealth was worth almost double including his portfolio of investments and other business ventures.

Who would you like to see Jake Paul fight next? Let us know in the comments section below

"That is just what I made from boxing [$40 million]," Paul told Fox Business. "I made some more on top of that from brand deals and advertisements. "That is not including my crypto investments, NFT investments, Metaverse investments. If I were to cash out, yeah I have probably made an extra $60 million on top of that just from my investments last year if I were to liquidate it.

"I put money into Bitcoin when I was sixteen years old but I am a long term holder so I can add to the retirement fund. I have my team at Morgan Stanley and they handle all this stuff. I am more into the Crypto side of things and they tell me what kind of traditional stocks I can put into."

Paul will now look to gain another sizeable payday when he returns to the ring for his sixth professional fight this August. An opponent is yet to be announced but the likes of Tommy Fury and Anderson Silva are expected to be in the running. Paul has also called for lucrative potential bouts against Conor McGregor and boxing legend Mike Tyson, with the latter valued by the YouTube star at around $300 million.

Previous : Mike Tyson wants to become YouTube boxing “champion” with launch of tournament
Next : Men from Birmingham branded ‘worst lovers’ as they ‘lack imagination in bedroom’