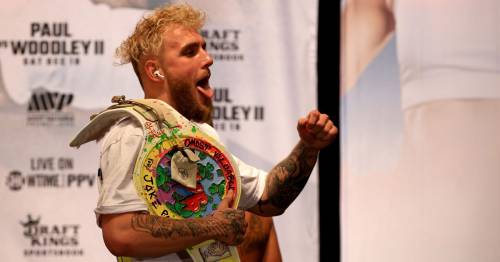 Jake Paul has claimed the $40million he reportedly earned in boxing last year is slightly lower than the official number.

Paul improved his professional record from 2-0 to 5-0 in 2021 by knocking out Ben Askren and beating former UFC champion Tyron Woodley twice.

His fight with Askren in April marked the first time Paul had headlined a PPV event, with the 24-year-old reportedly pocketing an eight-figure payday for the 120-second bout.

Paul and Woodley both earned a $2million purse for their fight clash in August and took home a percentage of the reported 500,000 PPV sales.

'The Problem Child' also took home a similar amount for their rematch in December, in which Paul won by knockout.

And Paul said after his father questioned the $40million figure, he told him the actual number was even more than that.

"My dad called me today and asked if the numbers that were reported today were inflated. I knew you made close to that but did you really make that?!' he asked.

"The answer was, 'Yes dad and in fact the numbers are slightly low'. Mind you I don't lie to my dad and he knows everything about my life.

"Even my brother thought the numbers were lower (according to my dad's conversation with him). A lot of times Forbes inflates the number made.

"In 2018 when I made the list I made $17m and they reported $22m I believe. On this day they are actually behind and the numbers are actually low.

"Most celebs would say, 'Thank the lord I'm so blessed" but I say any regular mother****** could do this shit if you are a sicko and ready to die for your cause."

Paul is expected to take seven months away from the ring and focus on promoting an undisputed lightweight fight between Katie Taylor and Amanda Serrano.

What are your thoughts on Jake Paul's rise in boxing? Let us know in the comments section below

Unified featherweight world champion Serrano signed to Paul's company Most Valuable Promotions last year and the YouTube star encouraged other athletes to join her in doing so.

"What was done this year in boxing has never been accomplished before and will never be replicated again. From the business side all the way to the cultural impact and historic knockouts," he continued.

"I want to thank my advisor/business partner/manager Nakisa Bidarian for being my partner in crime this year and helping me to conjure the unthinkable.

"For any athlete/fighter/even musical artist the best place to be represented right now is by Most Valuable Promotions and we just getting started.

"We got the secret crabby patty formula."

Previous : Stalker teen who followed ex to Benidorm scratched ‘nonce’ into his car after breakup
Next : North Korea says it test launched missiles from train