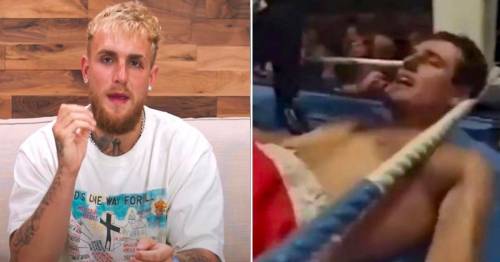 Jake Paul has claimed that "bum" John Fury is living off of his son's after "failing" during his own boxing career.

Paul will face Fury's son Tommy in the boxing ring on August 6 in a rescheduled bout, with the British star currently undefeated in the early stages of his boxing career. Fury Sr had a heavyweight career of his own which spanned eight years and involved 13 professional bouts, in addition to several unlicensed bare-knuckle events.

He held a record of 8-4-1 as a professional but suffered a brutal knockout at the hands of Henry Akinwande when stepping up in an eliminator for the British title. Paul has accused Tommy of "thinking" he can compete at the same level as his brother Tyson who is considered one of the best heavyweights in the modern era.

"Tyson Fury's dad John is living vicariously through his son because his boxing career was s***," Paul said during a YouTube video previewing his clash with Fury's son Tommy. "He never had anything, he was a bum and now you have this family where there is only one real superstar, money-maker and successful fighter. So basically Tommy thinks he's as good of a fighter as his brother Tyson and I plan to expose that on August 6 at Madison Square Garden.

"You tell me to 'fight a real boxer', the answer is 'no f***ing problem'. As far as real boxers, this is as real as it gets. Tommy Fury comes from a legendary bloodline of fighters; the gypsies who have been mauling people since they were f****** born. For Christ's sake, his brother is the heavyweight champion of the world."

Fury's son Tyson currently holds the WBC heavyweight title having knocked out Dillian Whyte and remains undefeated during his illustrious career. Tommy's father John has been heavily involved with their rivalry having shared heated words with Paul at a press conference to announce their previous meeting in December – which was later cancelled.

Who do you think will win – Jake Paul or Tommy Fury? Let us know in the comments section below

Most recently Fury Sr appeared to put the fight in jeopardy after confirming that he and Tyson will be unable to attend the planned meeting in New York on August 6. This came just days after Fury Sr released a video, issuing a scathing rant about the YouTube star and his team. I have nothing to do with this at all because it’s a pile of s***," he said during an Instagram post.

"I don’t like anybody who is associated with those people over there. They’re nothing but a pack of t*****s, YouTubers, and I’m not interested in it one bit in any way, shape or form." The fight has now been announced with both fighter signing their respective contracts and an official press conference is expected to take place next week to begin the build-up.

Previous : No10 suggest Boris Johnson WON’T raise Rwanda plan with Charles – hours after he vowed to
Next : Floyd Mayweather and Conor McGregor ‘in talks’ over boxing fight rematch