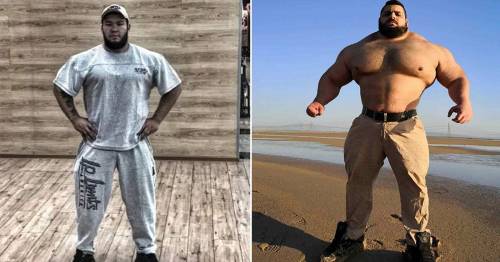 Kazakh Titan – real name Almat Bakhytovich – has recently called for a fight with Iranian Hulk but how do the two strongmen stack up against each other?

Little is known about Bakhytovich other than he has been calling to fight Hulk – real name Sajad Gharibi – for several years. It's clear from one glance of at Kazakh's Instagram that he doesn't like Gharibi and he wants to box him after the Iranian's recent fight fell through.

Gharibi was scheduled to fight British actor and fellow bodybuilder Martyn Ford, who is also known as the 'World's Scariest Man' in London last month. According to Ford, the fight was cancelled over "mental health concerns" regarding Gharibi.

The Iranian has refuted his rival's claim and threatened legal action against him. Keen to rebook another fight against a different opponent, Bakhytovich serves as a perfect opponent for Gharibi so let's examine the profiles of the two giants.

Little is known about Bakhytovich, who is an influencer from Kazakhstan with 23,000 Instagram followers. He claims to be a two-time strongman champion and a "master" of MMA and combat sambo.

According to his Instagram bio, Bakhytovich stands at 5'7" but weighs a massive 115kg. He claims to bench press 150kg and deadlift 300kg. Bakhytovich also won first place in some sort of bodybuilding competition in his native country two years ago.

Bakhytovich's muscles are not purely for show as he makes use of his physique for several strength challenges. He received an award for pulling a 109-ton cargo container last year and tried to take things a step further by moving a 26-ton aircraft at Nur-Sultan airport, but failed.

The Kazakh's other (questionable) feats of strength include breaking out of a pair of metal cuffs, cracking a nut with one finger and bursting open a can of coke with his bare hands. He also made a hot water bottle – with Gharibi's face stuck onto it – explode by blowing into it.

In his latest challenge to Gharibi, he threw around a doll with his face on it whilst stating: "Sajad, I am waiting for a contract. I am a master at MMA and a master at combat sambo. Let's fight Sajad, let's fight. Not you Hulk, you Sajad. Let's fight."

Do you want to see Iranian Hulk vs Kazakh Titan? Let us know in the comments section below

Standing at 6'2" and weighing over 175kg, Gharibi's man-mountain of a physique made him go viral on social media several years ago. He has been accused of photoshopping his pictures and fans were even more sceptical when Gharibi was dwarfed by Ford during their staredown in Dubai.

Like his counterpart Bakhytovich, the Iranian is a man of many talents. A bodybuilder, strongman and aspiring fighter, Gharibi has shown his level of strength by squashing items such as a frying pan and orange with his bare hands. He also claims his arms measures a massive 30 centimetres.

The Iranian Hulk boasts one million followers on Instagram

Gharibi has never competed in any discipline but was rumoured to fight his rival Ford several years ago in Polish MMA organisation KSW. Ford signed for the promotion, but Gharibi never followed suit and the fight fizzled out.

Outside of fighting, the Iranian was linked to a strongman showdown with Ford in 2019 but a fight never materialised for him as a result of the coronavirus pandemic. Gharibi also wanted to help fight ISIS terrorists in 2016, stating the end of the war in Syria was his "heart's desire".

Gharibi has welcomed a fight with Bakhytovich after telling the Daily Star he "called him to war”. The Iranian wants to avoid any promotion for the fight after his scuffle with Ford and get straight in the ring against his Kazakh rival.

Previous : iDubbbz boxing fight card: Every bout on YouTube Creator Clash undercard
Next : Inside deserted farmhouse frozen in time for 60 years with haunting pictures on walls