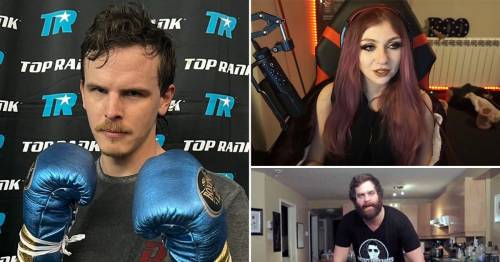 Several figures from the streaming service will compete in a tournament on the University of South Florida campus with all financial proceeds raised to be donated to charity including the American Heart Foundation.

iDubbbz has been eagerly anticipating a fight of his own for several years and is the self-proclaimed 'YouTube boxing guru' when addressed by his loyal army of 7.5 million followers. His opponent Dr Mike also boasts an incredible 9 million subscribers on the streaming service.

YouTube boxing has continued to rise and rise in recent years with Jake Paul and Logan Paul having success stateside while the likes of KSI and AnEson Gib have been fighting on domestic shores.

Tournament host iDubbbz will compete in the main event against Dr Mike with the pair boasting a combined subscriber-base of over 16 million on the streaming service.

Neither star has ever competed in the ring but have been training for around six months for the prestigious streaming platform event. iDubbbz has been waiting to compete in the ring for several years and is a self-proclaimed 'YouTube boxing guru'.

The 31-year-old has continued to make his comedy sketches while preparing for the event and even recently called out British star Tommy Fury to a potential fight after his recent endeavours with Paul.

The popular pair will square off in a heavyweight bout which will take place over five two-minute rounds in Florida.

Twitch streamer JustaMinx will make her maiden boxing appearance having generated a huge following in recent years. The star is approaching a million subscribers and will take on Yodeling Haley who went viral on TikTok and now has a loyal army of 3.5 million fans.

JustaMinx hinted at the fight for several weeks on her Twitter and streams online, with the pair set to do battle at junior-middleweight over five two-minute rounds.

In one of the most intriguing match-ups on the card, Financial content creator Graham Stephan will step in the ring to make his first appearance against OfflineTV’s robotics expert Michael Reeves.

Host iDubbbz has hinted this could be the fight of the night, with the pair training extremely hard for the fight.. Stephan has shot to fame for his analytics of financial trends and videos on how to make quick cash.

Meanwhile Reeves' profile rose by doing his "comedy-tech" sketches on his own channel alongside his appearances on Offline TV. The bout will take place over five rounds with the fight taking place at lightweight.

Co-host of Youtube show SuperMega, Watson will take on YouTuber Dad on the card with both men boasting a combined subscriber following of 500k on the platform.

Watson has a whole host of talents having produced comedy music alongside hosting a podcast and directing music videos. Meanwhile Dad's content is based around lessons from a father to a son that he has learned from his extended family.

The pair will meet at middleweight over the scheduled five-round distance.

Will you be watching the latest YouTube card tonight? Let us know in the comments section below

YouTube star Internet Comment Ettiquette who has an impressive one million subscribers on the platform will face American artist, animator and gamer Dj Welch.

The pair will meet in the heavyweight division alongside other fighters with the event also set for the five-round distance.

Brett 'Hundar' Hunley who is the co-owner of gaming channel Cow Chop will meet host of popular H3 podcast AB.

Hunley used to work for global YouTube channel Machinima before leaving and creating his current channel, and he also produced several other gaming shows. AB is responsible for creating the podcast's popular "Content Court" series.

The pair will meet at cruiserweight on the night over five rounds.

Magee is infamous for his time working with the late Daniel Kyre alongside fellow fighter on the card Watson. Meanwhile Ernst continues to rise in popularity for his humorous videos

The pair will meet in the cruiserweight division over the five-round distance.

Previous : ‘My husband ran off with his daughter – then came home and said it was best sex ever’ – World News
Next : Iranian Hulk vs Kazakh Titan tale of the tape after boxing fight call-out