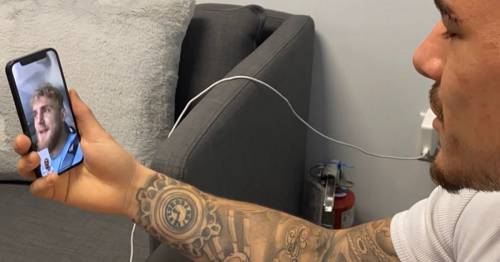 Newly-crowned lightweight champion George Kambosos has revealed he spoke to Jake Paul to offer the internet star tips on his upcoming fight.

The Australian will be ringside for rival Devin Haney's lightweight title clash with Joseph Diaz Jr this weekend while Paul faces the toughest test of his newly-found boxing career when he fights fellow celebrity Tommy Fury later this month.

And Kambosos revealed the support he received from Paul after his recent win and the advice he gave him for his next fight.

George Kambosos spoke with Jake Paul ahead of his next fight

"He put out some great tweets that he was very excited and was on the edge of his seat watching the fight, someone gave my number to him," Kambosos told Helen Yee.

"We had a chat. I was excited to chat with him as he's a global star. I gave him a few tips on his fight, a lot of people are saying he might not be able to win this fight.

"So I think he'll be able to do the business but again, Tommy Fury is from that lineage of the Fury family so they are gonna come and fight. It will be an exciting fight."

WBC "franchise" champion Kambosos would need a fight against Haney, who holds the legitimate WBC title, to set up an undisputed clash at 135lbs.

Haney was promoted to WBC champion in 2019 after winning the interim belt and has since defended his title three times.

Who should George Kambosos fight next? Let us know your thoughts in the comments section below

And Kambosos thinks Lopez wants "nothing to do" with a rematch as the American's father has hinted at a move up to 140lbs for his son, targeting a clash with undisputed champion Josh Taylor.

He said: "He’s [Lopez] gotta, you know, recover. There was a lotta damage he took," he said after the fight.

"I’ve got to heal a little bit as well, even though I wanna be back in the gym.

"So, we’ll see. There’s a lotta good names. But the best thing about it is I’ve got all the belts now, so I’m the shot-caller, I can pick and choose who I want.