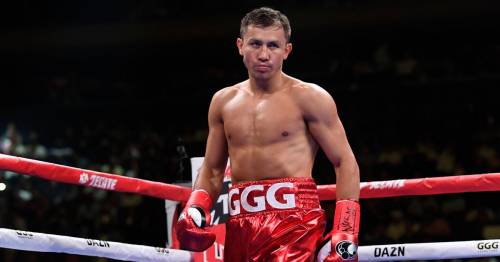 Golovkin was scheduled to defend his IBF middleweight title against Murata on December 29 but the fight has been postponed until early next year.

The fight – which is worth a reported £100million – is considered the biggest in Japanese history and was set to take place at the Saitama Super Arena.

It fell into jeopardy earlier this week when Japan tightened border controls due to the recently-emerging Omicron variant of the coronavirus.

And Golovkin reacted to the news by saying: "I am deeply disappointed that fight in Japan has been postponed but the health and safety of the public must always be the priority.

Gennady Golovkin's fight with Ryoto Murata has been postponed
(

"I look forward to returning to the ring against Ryota as soon as possible."

'Triple G' was looking to make the second defence of his titles since reclaiming them in 2019 against Sergiy Derevyanchenko.

Golovkin hasn't fought since December of last year when he stopped Kamil Szeremeta.

The Kazakh was hoping to kickstart another dominant run at 160lbs after losing his titles to pound-for-pound No.1 Canelo Alvarez in 2018.

Matchroom Boxing promoter Eddie Hearn said if Golovkin gets past Murata and doesn't face Alvarez in a trilogy, they would try and unify his middleweight titles.

“After the Murata fight, if Gennady wins and then doesn’t get the third Canelo fight, the next step is to further unify," he told Boxing Scene. "If you’re Gennady, that means you've only got (Jermall) Charlo and Demetrius (Andrade)."

Since handing Golovkin the first loss of his professional career, Alvarez has moved up in weight to become the first-ever undisputed super-middleweight champion.

Can Gennady Golovkin become undisputed middleweight champion? Let us know your thoughts in the comments section below

The Mexican will attempt to become a five-division champion in May as he is expected to face WBC cruiserweight champion Ilunga Makabu.

And Golovkin – who will only change weight class for the right price – thinks a trilogy fight against Alvarez is still possible in the future.

"This fight is possible. Theoretically nothing has changed, he told Sky Sports. "There are certain questions which have been posed. They are still open, they remain unanswered.

"We have been discussing it but haven't moved towards this fight for quite some time. We fought, I know who he is. I don't think about him at all, It isn't something I don't give any thought to.

"I don't want to entertain moving to a different division unless there is an offer on the table."