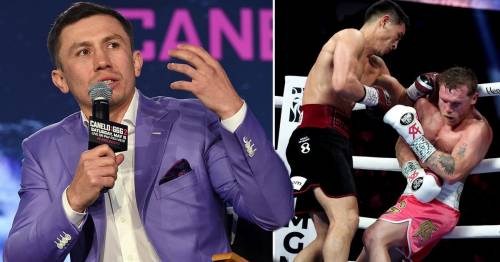 Gennady Golovkin has congratulated Dmitry Bivol on his victory over Canelo Alvarez after potentially losing his mega-money trilogy with his rival.

Alvarez signed a two-fight deal with promoter Eddie Hearn and needed a victory over Bivol to set up a lucrative third meeting with Golovkin in September. However Alvarez suffered shock defeat to the Russian in Las Vegas and revealed his plan to activate the rematch clause in the ring after losing the decision.

Golovkin hailed Alvarez's recent conqueror after the fight, tweeting: "Congratulations on your win Dmitry Bivol! That was solid. Keep it up!" The third instalment of Golovkin's rivalry with Alvarez was set to take place on Mexican Independence Day in September providing Alvarez became two-time 175lb champion by beating Bivol.

However the 31-year-old was outclassed by Bivol and now faces the prospect of a revenge mission on that date instead, but Alvarez will make his final decision on his plan in the coming weeks. After admitting his struggles with the weight increase after the final bell, Alvarez may opt to return and defend his undisputed titles against Golovkin at 168lb.

Matchroom Boxing kingpin Hearn expects Alvarez to try and avenge his defeat to Bivol later this year over any third meeting with his two-time Kazakh rival. “I think Canelo against Dmitry Bivol (in a rematch) is probably the biggest fight in boxing right now, but it’s going to be down to Canelo, and obviously we’ll speak to Dmitry and (manager) Vadim (Kornilov), but I can’t see (Canelo) not wanting to accept the challenge,” he said.

“I said in the build-up, it’s like Canelo wants to handicap himself and fight these big, great champions to test himself, and tonight it was maybe a bridge too far against a great light heavyweight world champion. But knowing Saul, I would think he would only want one fight, which is the rematch with Dmitry Bivol.”

Do you think Canelo Alvarez should fight Gennady Golovkin or rematch Dmitry Bivol? Let us know in the comments section below

Alvarez previously suggested his rivalry with Golovkin was personal and he wanted to settle their feud in a third meeting after facing Bivol. "Yeah, it’s personal," he said. "He talks a lot of s***. "He says a lot of things. We’ll see. First things first. We still have to win May 7. I am one percent focused on May 7. After that, we will talk about that fight.

"But with this deal, they wanted a fight with Golovkin. So I said, ‘Why not? Everyone wants (me to) fight Golovkin, right?’ Maybe a little late, maybe not, but everybody wants the fight.” But the Kazakh star dismissed his comments and hit out at his rival's "indecent" behaviour. I’ll be honest with you. If he believes it was something I said and that it was personal, where has he been all these years?," Golovkin told Ariel Helwani.