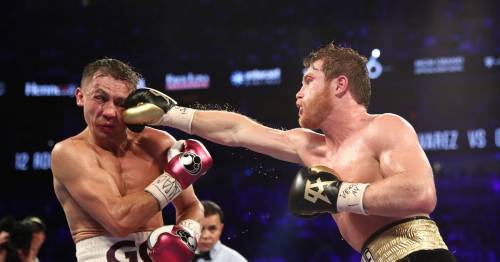 Gennady Golovkin has broken his silence on a trilogy with Canelo Alvarez by admitting it is unlikely to happen while several questions remain unanswered.

The Kazakh middleweight will attempt to unify the division later in the year when he faces Ryota Murata in Japan.

Golovkin and Alvarez have been linked with a third meeting since Alvarez became undisputed champion against Plant earlier this month.

Now the 39-year-old has continued his frustration at not being handed the decision in their previous meetings, and has refused to make a switch in weight without an offer.

"This fight is possible," Golovkin told Sky Sports. "Theoretically nothing has changed.

Gennady Golovkin has fought Canelo Alvarez twice without a victory
(

'There are certain questions which have been posed. They are still open, they remain unanswered.

"We have been discussing it but haven't moved towards this fight for quite some time. We fought, I know who he is. I don't think about him at all, It isn't something I don't give any thought to.

"I don't want to entertain moving to a different division unless there is an offer on the table.

"Imagine if I moved to 175lbs [light-heavyweight], the number of people calling me out will increase by 30 per cent! The army of fighters who self-promote themselves by using my name would only increase in number."

Golovkin will look to retain his world champion status after regaining his belts with victory against Sergiy Derevyanchenko.

And he is currently undefeated outside of his two bouts against Alvarez which sparked a furious rivalry after their conclusion.

The initial meeting ended in a draw with Golovkin extremely frustrated with the outcome after causing the Mexican huge problems.

He defended his unified titles successfully against Vanes Martiyosan in 2018 before pursuing the hotly-anticipated rematch with Alvarez later in the year.

Who would win in a trilogy bout- Gennady Golovkin or Canelo Alvarez? Let us know your thoughts in the comments section below

The Mexican was handed a majority decision victory in the rematch and he became the first man to conquer Golovkin during his illustrious career.

Alvarez has since gone on to conquer two more divisions defeating Sergey Kovalev at light-heavyweight to become world champion.

Then he completed a quicktime rise to become super-middleweight champion within a year, conquering the likes of Callum Smith and Billy Joe Saunders before sealing history against Plant.

But the Mexican now looks set to make a historic move to cruiserweight against Ilunga Makabu in a historic attempt to reach the summit of another division.

Although the 31-year-old has effectively ruled out stepping up to the blue-ribbon division against the likes of Anthony Joshua or Tyson Fury.

Previous : Jake Paul tells Tommy Fury to give his multi-million-pound purse to brother Tyson
Next : Yodel driver smashes into car’ on CCTV then reverses off – but police ‘close case’