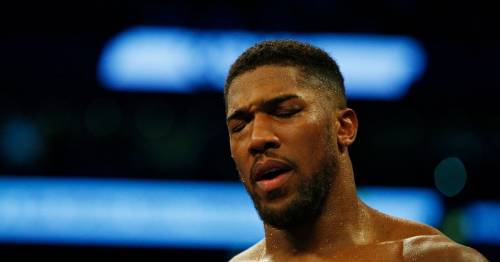 Joshua lost his heavyweight titles for the second time in four fights when he was outpointed by Usyk, who was the underdog heading into the fight.

Matchroom Boxing's Eddie Hearn – who admitted Joshua has been "sulking" since the loss – said they activated the rematch clause this past weekend with the second fight likely to take place next spring.

And talking after Fury's emphatic stoppage win against Deontay Wilder this past weekend, Warren explained why he ranks Joshua as the sixth-best heavyweight in the world.

He told BT Sport Boxing : "I'll be a bit bias, we promote Joe Joyce who's the WBO number one and we're also involved with Daniel Dubois who's the number one in the WBA.

"Then you've got Usyk. You see what he did with Anthony Joshua. Then you've got Dillian Whyte. So if you want to put them in order. Tyson, number one. Usyk, number two and I think the other three, call them all joint three.

"I don't think Dillian Whyte's got the beating of the other two guys at all. In fact, we made offers for him to fight them which he didn't take.

"That's how I see it. Anthony Joshua, I think he probably comes in at number six now. I look and think what would've happened had Anthony Joshua of boxed Wilder on Saturday night, who would you've had your money on?"

Whyte is next in line for Fury's WBC title with the WBC expected to order the fight in 30 days.

But Whyte will have to get past Otto Wallin later this month before thinking about challenging 'The Gypsy King'.

Can Joshua avenge his loss to Usyk in their rematch? Let us know your thoughts in the comments section below

Wilder broke his middle finger during his loss and has been suspended for six months by the Nevada State Athletic Commission.

His trainer Malik Scott revealed Wilder is already planning his next fight, with the American's co-manager Shelly Finkel teasing a fight against Joshua.

Warren praised Wilder's gutsy performance and said he would have backed the American if Joshua was stood across from him on Saturday night.

"I would have backed Wilder all day long with the performance he put in. With the other guys, Joe's a very capable fighter. Tough guy, massive heart, walks forward. He's gotta be there," he continued.

"I think with Daniel Dubois he's a wrecking machine. He got a fantastic jab, he looked good in his last fight, they loved him over in America when we took him there.

"Obviously Dillian Whyte's in there. I think his fight against Derek Chisora, the two fights he had, there was nothing in those fights. Then what Tyson did with Derek Chisora, he took him to school and Derek never won a second of any rounds."