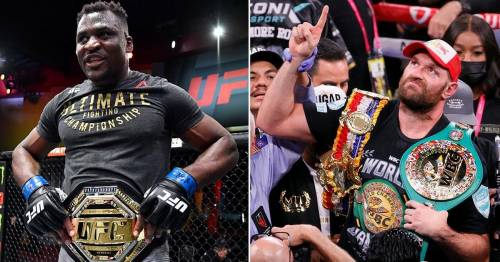 Francis Ngannou has been told by his former coach that he would need a three-year training camp to stand any chance against Tyson Fury in a boxing match.

UFC heavyweight champion Ngannou is set to face Lopez's student; interim champion Ciryl Gane, at UFC 270 later this month, but has also been angling for a boxing match with Fury.

Fury is the world heavyweight champion in boxing, and his promoters have admitted that the fight would be a massive event for both men.

But the Cameroonian fighter would likely be a monstrous underdog against the talented technical boxer Fury, who has beaten the likes of Wladimir Klitschko and Deontay Wilder twice in his career.

And Fernand Lopez believes he needs to take a massive break from MMA to focus if he is to get anywhere against the heavyweight boxing champion.

“I think the fight makes sense for Francis because he thinks he can cash out," Lopez said.

Francis Ngannou is no match for Tyson Fury, according to his old coach
(

"There’s also something there for Tyson Fury – he doesn't care that it’s not a competitive fight, he just wants to make money and make some news.

“It would take at least three years for Francis Ngannou to be competitive from a boxing standpoint with Tyson Fury, and I mean three years only dedicated to boxing.

“Realistically he would have to stop everything else and probably do nothing else for three years, only boxing.

"No grappling, nothing else, the way that his body and muscles are built, it will not allow him to keep throwing punches after the third round."

However, even with that long of a training period, Lopez struggles to see a way that Ngannou could hang in with Fury given the Brit's conditioning.

Ngannou has lost the two UFC fights of his which went the distance, to Stipe Miocic and Derrick Lewis, who is known for his infamously poor stamina.

Meanwhile, Fury outboxed Klitschko over 12 rounds and twice surpassed round 10 against Wilder in their trilogy.

“I’m not sure Francis can ever challenge the stamina or endurance of Tyson Fury," Lopez continued. "All he can do is have a high defence; be elusive, close footwork, change direction.

Would you like to see a fight between Tyson Fury and Francis Ngannou? Let us know your thoughts in the comments section below!

"But eventually Tyson will wear him down, get him tired, work the body and then go up with the uppercut, and sooner or later Francis will give up because of the volume, because of the pressure shots and he will just go down.

"I don’t see how he can win the match, this is an opportunity for him to cash out.

“I’m not sure if you’re a UFC fighter it’s worth letting it all go and have three years of steady boxing training – how would you live your life, what would be your income?

"And after three years you may be competitive enough to stand there and keep throwing punches.

“We are not expecting anything brilliant, Francis is not a boxer. You train a lot to be a boxer.

"Boxing needs dedication, boxing needs sacrifice, you need years and years to train. So we know the outcome of that fight."

The quotes in this article first appeared on the Betway US blog.

Previous : Thor Bjornsson at lightest weight since he was 10 ahead of Eddie Hall fight
Next : Novak Djokovic clarifies timeline of positive COVID-19 test, apologizes for ‘administrative mistake’ on immigration form regarding previous travel